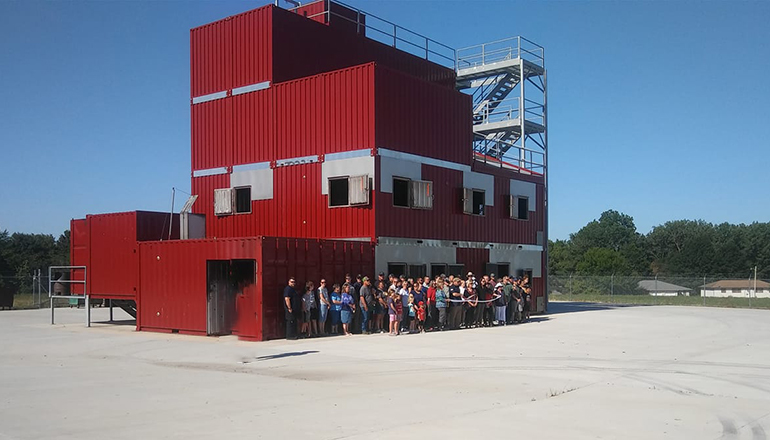 The Trenton Fire Department hosted a Trenton Area Chamber of Commerce ribbon-cutting ceremony and had tours of its training tower on June 15th.

Fire Chief Brandon Gibler says the tower can be used in multiple ways and has already been used.

Other fire departments can also use the tower.

Gibler emphasizes that it is important to have well-trained firefighters.

The facility has five levels with the first and second floors burn areas.

The third and fourth floors are primarily firefighter survival and rescue area with tube and crawl mazes. Gibler notes there are also props to teach how to get out of difficult situations.

The top portion has places for high-angle rescue and repelling and there is also a confined space prop and a flashover simulator.

The tower was completed in March 2020, but Gibler said the shutdown due to the pandemic limited what the fire department could do.  He says the funding for the building was made possible by the passing of a fire sales tax in 2016.

The Trenton Fire Department got a new ladder truck in 2018.  Gibler says American Fire Training Systems was the company that met the specifications requested for the fire training tower and was the low bid. He comments that the tower itself cost about $740,000. The building had to be financed as well as the ground development, concrete, and fenced area.

Gibler notes American Fire Training Systems does a lot of fabrication at its facility in Illinois, the company uses shipping containers to building its towers, and then a crane sets them.

Prior to the training tower, the Trenton Fire Department used a burn trailer for training.

Gibler expressed appreciation to the community for the support the fire department has received.

Anyone who was not able to attend the open house on June 15 is invited to contact the fire department to schedule a tour at 660-359-5552.