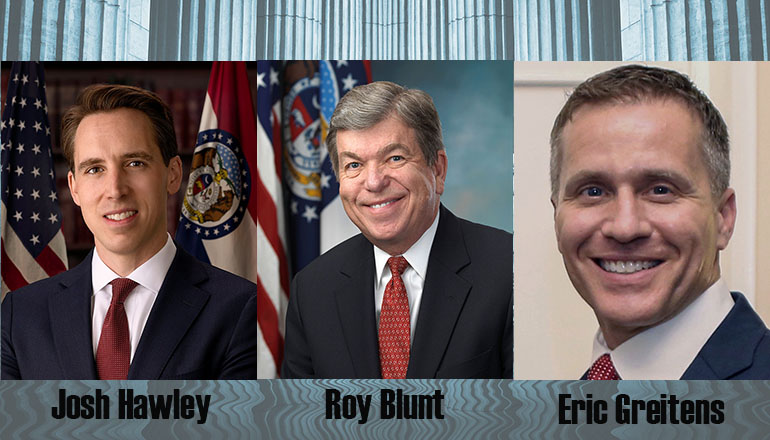 (Missouri Independent) – The eyes of the nation turned to U.S. Sen. Josh Hawley over the holidays when he became the first senator to announce an objection to the certification of presidential electors.

But the eyes of local politicos turned instead to his home-state colleague, Missouri’s senior senator.

How would Roy Blunt — up for re-election next cycle, with a primary threat looming — respond to Hawley’s move?

Blunt and Hawley are not the first two same-state, same-party senators to experience tension.

Indeed, any Blunt-Hawley strain pales in comparison to other recent intra-party Senate rivalries.

In 1999, after New Jersey Sen. Frank Lautenberg scolded fellow Garden State Sen. Bob Torricelli at a private Senate Democratic luncheon for telling a reporter he felt closer to the state’s Republican governor than to Lautenberg, Torricelli screamed, “You’re a f***ing piece of s**t!” and “I’m gonna cut your balls off!”

Soon thereafter, sick of feuding with his counterpart, Lautenberg decided to retire in part due to his hatred of the Torricelli, according to a Jason Zengerle obituary eulogizing Lautenberg.

A more recent and perhaps closer analog would be Texas Sens. John Cornyn and Ted Cruz.

Soon after his election to the Senate in 2012, Cruz riled the Republican base — and built a national profile — by vowing to leverage a government shutdown to force President Barack Obama to sign a repeal of the Affordable Care Act, despite the fact that Obama would have sooner made John Edwards his Special Adviser on Unintended Pregnancy Reduction.

Like any reasonable observer, Cornyn knew Obama would veto any Obamacare repeal and that Congress would sustain it. He joined then-Speaker John Boehner and other leading Republicans to try and rein Cruz in before Cruz spearheaded a politically disastrous government shutdown for which Republicans would be blamed.

Things went as Cornyn had predicted, and yet Cruz was the one who walked away from the train wreck as the poster boy of the then-ascendant Tea Party, and a rising 2016 presidential candidate.

In fairness, legislators of the same party have always vied for primacy among party-aligned interest groups, donors, and activists, leading to natural competition for time, attention, grassroots activism, and, of course, money.

The present age of party and voter polarization, with just 7 or 8 states truly in play in a presidential election and 68 of the last 69 Senate elections mirroring the winning party for their state in the presidential election (Maine’s Susan Collins was the sole exception), should heighten the intra-party competition for influence since there are so few competitive general elections.

When the general election is increasingly uncompetitive due to ossifying party loyalty, the fiercest battle is often over the above – party-aligned interest groups, donors, and activists – as opposed to swing voters, who in Missouri circa-2020 seemed to have become too scant to swing much of anything.

In the 1990s, the incentive structure for U.S. senators and representatives tilted heavily towards party loyalty. Parties that were legally able to raise unlimited amounts of soft money doled it out to favored candidates, and team players profited.

The incentives in today’s era are quite different.

Without regular order in the House and Senate, policy is made in leadership backrooms and appears on the floor via legislative immaculate conception, marginalizing rank-and-file members.

Super PACs allow mega-donors to bypass leadership gatekeepers and contribute unlimited amounts to their favored candidates. Hordes of low-dollar donors, first mobilized on the left by Howard Dean and Barack Obama, and later turbocharged on the right by Donald Trump, gravitated towards candidates whose attention-grabbing Facebook ads and viral clips stirred them to make one-click donations thanks to ActBlue and WinRed.

All of this has made team players look like suckers.

What does this have to do with Josh Hawley and Roy Blunt?

Blunt cut his DC political teeth in the 1990s, and as the rare legislator to rise into leadership in both chambers, he is – by nature, generation, and practice – an establishmentarian and team player.

Though Missouri’s gold-plated establishment — former Senator Jack Danforth along with mega-donors David Humphreys and Sam Fox — brought Hawley to the dance by donating several million dollars to his 2016 and 2018 efforts, he has, in just a few short years, transformed himself into an anti-establishment rabble-rouser.

Following Hawley’s announcement that he would object to the certification of presidential electors, and a week later, the ubiquitous picture of him raising his clenched fist to cheer on the Capitol protesters, his blue-blooded backers disavowed him.

But while the Missouri elite may have abandoned Hawley, the national online right rewards inflammatory rhetoric and positions. There’s a reason that Marjorie Taylor Greene raised nearly as much in a few days as Rep. Blaine Luetkemeyer raised all of the 2020 election cycle.

Having lost his billionaire backers, Hawley determined that his best route to accumulating the nine-figure sum necessary for a likely national campaign would be to double down. That’s why, even on blood-stained Capitol floors on the night of January 6, he resisted entreaties from Republican colleagues to refrain from objecting to the Pennsylvania vote certification.

One senator had a special stake in getting Hawley to stand down that night: Roy Blunt.

Due to the nature of intra-party competition among same-state senators, one senator never wants to be the one whose party activists find him lacking in energy and appeal, insufficiently strong in defending the party’s president or attacking the other party’s leaders.

And yet, that’s where Sen. Blunt finds himself.

The split-screen image of Blunt’s statesmanlike posture on January 20, graciously presiding over President Biden’s inaugural, juxtaposed against Hawley’s fist-pumping exhortation to the gathered masses on the Capitol grounds, will not endear Blunt to the 75 percent of Missouri Republicans who polling indicates believe Trump’s lie about the stolen election.

The first layer of irony is that Hawley’s election objection may have opened up space on Blunt’s right for a primary from He Who Shall Not Be Named.

The second layer of irony is that while Hawley and Greitens warily circled each other for years, both seen as rising stars with national ambitions, they are now strange rhetorical bedfellows. Both perpetuate the Big Lie as one explores a comeback Senate bid by attacking Blunt for “standing with Joe Biden at the inauguration,” and the other eyes a 2024 presidential run.

The final layer of irony is that Hawley’s repositioning from establishmentarian to populist insurgent resembles Greitens’ own metamorphosis.

In 2017, Greitens was leveraging his relationship with strategist Nick Ayers to cultivate Vice President Pence, campaigning for other governors, and pursuing the RGA’s vice chairmanship. More recently, he was seen serving as a one-man Amen Choir for Diamond and Silk.

A new Morning Consult 2024 Republican primary poll suggests that Hawley’s gambit has failed to reap electoral dividends. After his splashy national debut, he came in tied for 7th at 1 percent.

But will it also backfire at home by enabling a vengeful brawler to mount a comeback — even as it forces Hawley to choose between loyalty to his Senate colleague, or to the demagogic strategy he deployed to catapult himself to national prominence?

Jeff Smith is executive director of the Missouri Workforce Housing Association, which supports development of safe, affordable housing. Previously, he taught public policy at Dartmouth College and The New School, represented the city of St. Louis in the Senate, and wrote three books: Trading Places, on U.S. party alignment; Mr. Smith Goes to Prison, a memoir and argument for reform; and Ferguson in Black and White, an historical analysis of St. Louis inequality. He holds a Ph.D. in political science from Washington University.