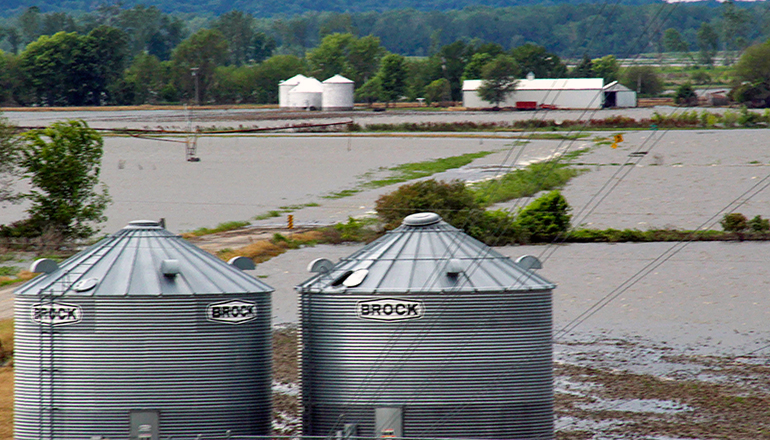 A congressman who represents north Missouri on Capitol Hill warns that northwest Missouri is still suffering from flooding and that there’s a lot of damage to infrastructure.

U.S. Rep. Sam Graves traveled from his Atchison County farm to Jefferson City this week to file for re-election to his 11th term. Graves is the longest-serving Republican in Missouri’s congressional delegation. He’s also a dean in the delegation, along with U.S. Rep. Lacy Clay, D-St. Louis. Both were elected to Congress in 2000.

Congressman Graves spoke to Missourinet after he filed, reiterating that flooding and transportation are his top two priorities. He says House Speaker Nancy Pelosi, D-California, and other House Democrats have focused too much attention on impeachment.

“We haven’t worked on flood legislation, we have not worked on prescription drugs, we have not got an infrastructure bill because they’ve been spending all of their time with impeachment, and that’s all they seem to want to do,” Graves says. Graves, the ranking Republican on the House Transportation Committee, says there are flood-damaged roads and bridges in northwest Missouri that still need to be rebuilt.

He’s critical of the U.S. Army Corps of Engineers, saying they don’t listen. “It’s a management situation, that’s what it comes down to is how they manage the Missouri River,” Graves says. “And we’ve got people’s lives on the line, and their livelihoods and the farms and their communities.”

Congressman Graves and Governor Mike Parson (R) have both criticized the Corps. Parson and the governors of neighboring Iowa, Kansas and Nebraska have met with the Corps of Engineers three times to discuss what needs to be done differently in the future.

The governors have signed a four-state agreement to cooperate on issues relating to flood control and the Corps.

As for Graves, he wants to see changes in Corps plans.

“It’s very frustrating that the Corps doesn’t seem to want to to change,” says Graves. “And it’s like dragging them, kicking and screaming.”

Graves says flood control should be the Corps’ top priority for the Missouri River. He also notes the severe flooding that happened in 2019 in north-central Missouri’s Brunswick, which is in his district.

Severe flooding from the Grand River caused a railroad bridge to wash out in Brunswick, and it also damaged other infrastructure in the town of about 800. The Missouri Farm Bureau says more than 1.4 million acres of farmland in the state went unplanted in 2019, due to flooding.

The state Department of Agriculture (MDA), the state Department of Natural Resources (DNR), Farm Bureau, the Missouri Levee, and Drainage District Association and the Coalition to Protect the Missouri River will hold round table discussions Monday and Tuesday about flooding.  The meetings are designed to answer questions from farmers about 2019 flooding and to help them prepare for potential flooding this spring.

There will be two meetings on Monday in northwest Missouri: at 10 a.m. at the Atchison County Extension Building in Rock Port and at 2:30 p.m. at the East Hills Library in St. Joseph. Tuesday’s meetings will take place at 9 a.m. at the Knight and Rucker Banquet Hall in Brunswick and at 2:30 at the Corner restaurant in east-central Missouri’s Rhineland.

Graves was re-elected to his tenth term in 2018, defeating Democrat Henry Robert Martin with about 65 percent of the vote.

Click here to listen to the full three-minute interview between Missourinet’s Brian Hauswirth and U.S. Rep. Sam Graves, R-Tarkio, which was recorded on February 25, 2020, at the Kirkpatrick Building in Jefferson City: