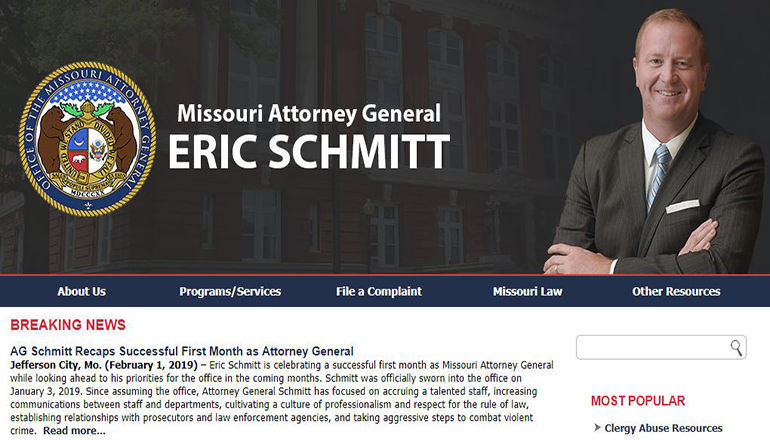 Share2
Tweet
Reddit
Share
Pin
Share
2 Shares
Missouri Attorney General Eric Schmitt has announced his office’s findings after reviewing all available existing evidence and any available new evidence in the Tory Sanders case. Consistent with the findings of then-Attorney General Josh Hawley and the U.S. Attorney’s Office, who also consulted with the U.S. Department of Justice’s Civil Rights Division, the Attorney General’s Office found through their review of the case that there is not enough evidence to prove first or second-degree murder charges in this case. Charges other than first or second-degree murder are not possible due to the expiration of the statute of limitations.

Two of the Office’s most experienced attorneys, with 60 combined years of experience in complex cases like capital murder and officer-involved deaths, conducted the review, and their findings can be read in detail AT THIS LINK.  Both attorneys combed through civil deposition transcripts, a nearly 600-page investigative report from the Missouri State Highway Patrol and the Federal Bureau of Investigation, the initial autopsy report from Dr. Diediker, the subsequent autopsy report from Dr. Deering, analysis from Dr. Mary Case, and separate analysis from Dr. Jane Turner, 50 total interviews from those involved, and more.

After this thorough review, the Office determined there wasn’t enough evidence to meet the burden of proof for first or second-degree murder charges, which carry the highest burden of proof in our courts.

“The death of Tory Sanders is tragic and heartbreaking, particularly for his family and his loved ones, and my heart goes out to them. When asked to review this case, I said that my Office would review existing and any new evidence to ensure all evidence is considered,” said Attorney General Schmitt. “Two of my Office’s most experienced public safety attorneys meticulously combed through investigative reports, autopsies, hours and hours of video, deposition transcripts, and other evidence to make an informed decision about charges in this case. Consistent with what the previous administration, the U.S. Attorney’s Office, and the U.S. Department of Justice found in their reviews of this case, my Office determined that there isn’t enough evidence to prove beyond a reasonable doubt first or second-degree murder in this case.”

The Attorney General’s Office agreed to review existing evidence and any new evidence available and make a determination.

The Office made contact with the then-counsel for the Sanders family in June and obtained video and transcripts of 19 depositions taken during the course of the civil suit, which were reviewed by the Office.

The Office was also given and reviewed the Missouri State Highway Patrol’s 600-page investigative file, which also contains investigative files from the Federal Bureau of Investigation. The file consists of videos from the jail, video from a cell phone, recordings of interviews, photographs, autopsy, and toxicology reports from Drs. Russell Deidiker and Thomas Deering, cell phone extractions, and more. The memo states, “The multi-media, in this case, included 50 interviews, which include up to three interviews of some of the persons present in the jail cell when Mr. Sanders died.”

Dr. Deidiker conducted the initial autopsy and toxicology report for Mississippi County, and Dr. Deering was retained by the Sanders family to do another autopsy and toxicology report. Both Drs. Deidiker and Deering agreed that Sanders’ cause of death was Excited Delirium Syndrome (EDS), and that Sanders had cocaine and methamphetamine in his system, which contributed to the EDS. Dr. Mary Case was retained by the U.S. Attorney’s Office to conduct a review of Dr. Deidiker and Dr. Deering’s autopsies, and in her review, she agreed with their findings.

The memo notes, “Dr. Deidiker disagrees with Dr. Turner’s conclusions and disagrees that there is evidence in the photographs to show evidence of pressure on the neck that would cause death,” and also states on a different page, “neither pathologist [Diediker or Deering] found any injuries or hemorrhages to the neck structures.”

The Office reviewed the videos provided in the file several times, both to analyze the videos and to see if there is any animus expressed towards Mr. Sanders by any of the jailers or law enforcement, which the Office did not see or find.

After a thorough review, the Office came to the conclusion that the burden of proof for first and second-degree murder could not be met, stating in the memo, “we do not believe the State could produce evidence that any of the officers involved in this incident knowingly caused the death of Mr. Sanders, with or without deliberation.”

The memo concludes with, “For these reasons, while it is a tragedy that Mr. Sanders died while in the custody of the Mississippi County Sheriff, these prosecutors recommend against pursuing any murder charges for the death of Tory Sanders.”