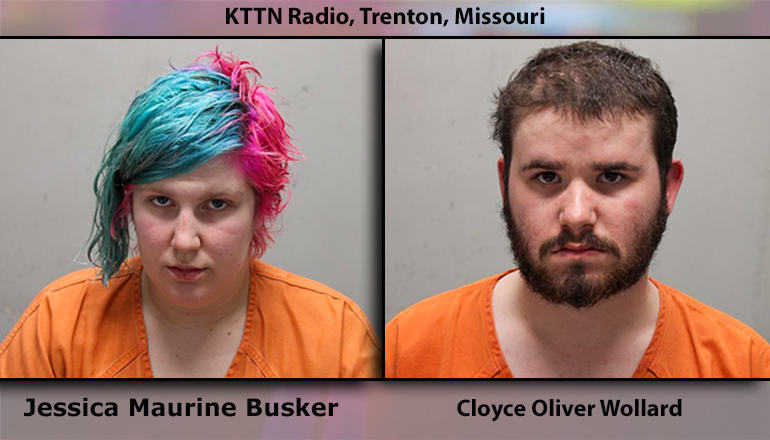 A man and a woman accused of operating an illegal daycare out of a home and having unsanitary living conditions have been charged in Livingston County.

Twenty-four-year-old Jessica Maurine Busker of Chillicothe and 21-year-old Cloyce Oliver Wollard (no address given) have each been charged with six counts of felony first degree endangering the welfare of a child and creating a substantial risk, first offense – no sexual conduct.

No bond is allowed for Busker. She is scheduled for a bond hearing on March 29th.

A probable cause statement from Chillicothe Police Detective Whitney Murdock says she and other officers visited an unlicensed daycare operated by Busker and Wollard in the 200 block of East Polk Street of Chillicothe on March 25th. Things she says she observed included trash outside, animal feces inside, more than 10 cats lying on furniture and around children, and holes in the ceiling leaking water.

Chillicothe Police Chief Jon Maples reports children at the residence were not being fed or hydrated on a regular basis. Food provided to the children reportedly was not adequate or was spoiled. The children were also said to be getting into animal food and water.

The probable cause statement notes Busker has had three of her own children removed from her care. She was charged in Macon County in 2018 with endangering the welfare of a child—second degree and assault—fourth degree. She also had an active failure to appear warrant on stealing out of Green County with a bond of $1,500 and a warrant on driving while suspended out of Warrenton with a $200 cash-only bond.