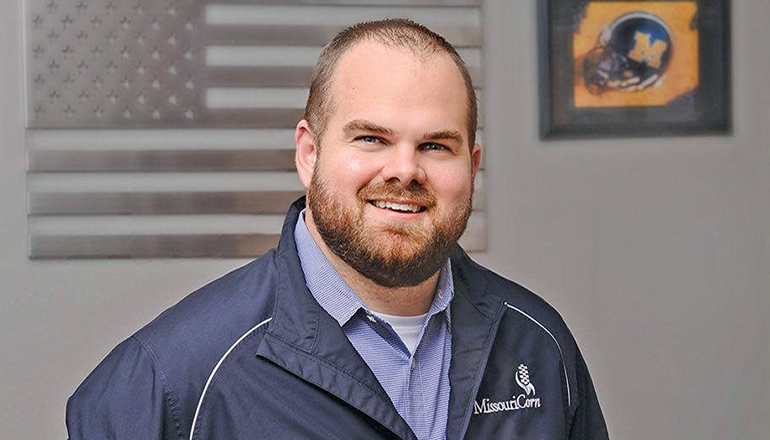 When Bradley Schad takes over as CEO and executive director of the Missouri Corn Growers Association and Missouri Corn Merchandising Council on March 15, he will bring a variety of agricultural experiences with him, starting with his time growing up on his family’s diversified farm near Versailles.

“I grew up on a farm, I was in FFA, a little bit of 4-H,” Schad said. “Agriculture has always been in my blood.”  After graduating with an ag systems management degree at the University of Missouri, Schad worked at a John Deere dealership before he started working for Missouri Corn in 2008. Many farmers in the state have livestock as well, and Schad said he wants his work with Missouri Corn to help the broad agriculture sector.  “What I’m looking forward to most is helping agriculture in general, row crops and livestock,” he said. “… I want to maximize the voice of how important agriculture is to the nation.”

He began working for Missouri Corn by specializing in ethanol and market development, two areas he said will continue to be big priorities when he takes over as CEO. His interest in ethanol started when he was growing up. “I always enjoyed working on motors, working with tractors, tinkering in the shop,” Schad said. He said some of his work with ethanol involved fighting for market access and “setting the record straight” on misconceptions about ethanol. A key task going forward will be to continue growing ethanol as an export product, he said, citing success in Mexico, Japan, and China.  “We’re very excited about those opportunities and growing them,” Schad said.

Gary Marshall, the current Missouri Corn CEO and executive director who is retiring after over three decades in that role, said there will be a “seamless transition.” Marshall said Schad has extensive knowledge of the ethanol industry and internal combustion engines and has traveled the world to promote the product and build trade relationships.  “He’s one of the top experts on ethanol in the industry,” Marshall said.

Schad said biofuels have helped with demand, but also benefited other sectors of agriculture, such as providing distillers grains for livestock feed.  He said he is looking forward to making a difference for farmers. “I always have wanted to help agriculture out, help farmers out,” he said. A key part of that will be increasing corn demand to support prices, Schad said.  “We’re going to be pushing for, as we always have, increasing demand for corn,” he said.  A lot of this demand will come from supporting the ethanol and livestock industries. Schad said another priority will be working to make sure regulations don’t hurt corn growers, while also working to protect the land.

“Farmers are the ultimate conservationists,” he said. Schad said continuing work on developing export markets is key to profitability. “We want to stay profitable and bring on the next generation,” he said.

This export work includes continuing to stress that the U.S. is a reliable provider with a large, high-quality supply. Schad said China’s recent purchases have been encouraging, and India could be a big ethanol market as the country works to clean up air pollution.

An effective Missouri Corn organization can help growers meet those challenges and advance the industry, he said.  “I look forward to leading a strong organization that our members can be proud of,” he said. “We are excited to continue the tradition that Gary and growers have built over the past 34 years. I’m ready to get started.”