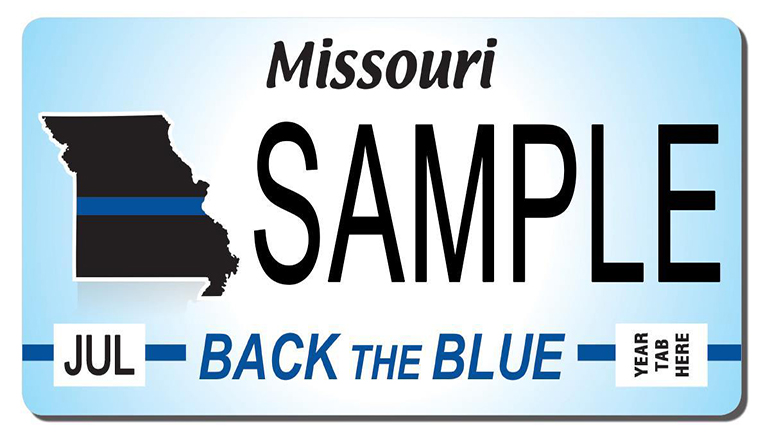 State Rep. Sara Walsh, who sponsored the bill to create the new license plate, was joined by House Speaker Elijah Haahr and several other legislators for the unveiling ceremony at the Missouri Law Enforcement Memorial on the riverside of the State Capitol Building. They were joined by several members of the law enforcement community and Missouri Department of Public Safety Director Sandy Karsten, Missouri Highway Patrol Colonel Eric Olson, Ashland Police Chief Lyn Woolford, and Speaker Pro Tem John Wiemann, who spoke at the event. David and Beverly Thomas, who are the parents of Officer Molly Thomas Bowden, assisted in unveiling the Back the Blue license plate. Bowden was a Columbia Police Officer who was killed in the line of duty in 2005.

“I’m proud of the incredible show of support we saw today for our men and women who serve us in law enforcement. We made it clear that here in Missouri, we back the blue. I want to thank all of my colleagues and everyone who worked so hard to make this new license plate a reality. I know Missourians in all parts of our great state will proudly display the new plate as a show of support for the amazing individuals who work so diligently to protect our communities,” said Walsh, R-Ashland.

Walsh was the sponsor of HB 898, which authorized the “Back the Blue” license plate. Senator Mike Bernskoetter carried the bill in the Senate.  A $10 contribution will be collected from each license plate applicant for the Missouri Law Enforcement Memorial Foundation, which honors those officers who have made the ultimate sacrifice in the service of the citizens of Missouri. This will help ensure the memorial continues to stand in memory of Missouri’s fallen law enforcement officers. Those who want the plate will also pay a $15 fee in addition to normal registration costs. Walsh said Missourians interested in obtaining one of the new plates can apply for them online at the Department of Revenue’s website.