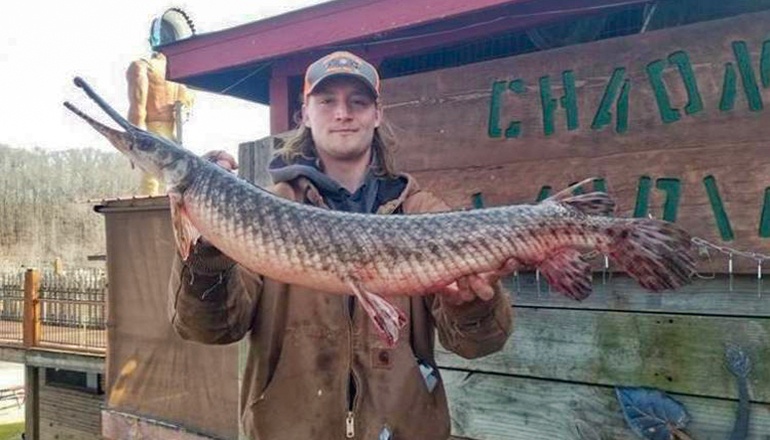 Devlin Rich of Williamsville set a new state record when he caught his spotted gar. Rich was fishing with a pole-and-line at Wappapello Lake on February 25 when he reeled in the 10-pound, 9-ounce fish. His catch is not only the latest Missouri state record, but it beats the current spotted gar world record of 9-pounds, 12-ounces set back in 1994.

Spotted gar is rather common and widely distributed in the Bootheel lowlands of southeastern Missouri.

“Because of the hard, bony jaws, gars are seldom taken on hook-and-line and are rarely used for food,” noted MDC Fisheries Programs Specialist Andrew Branson. “Special techniques are required to capture them consistently with rod-and-reel, but they do provide a ready target for the bowhunter because they often bask near the surface of the water.”

Gars are generally associated with warm, sluggish backwaters. They frequently rise to the water’s surface, opening and closing their jaws with a loud snap, then sinking below. This behavior allows them to swallow air into their swim bladder, which allows it to function much like a lung. This adaptation helps them survive in still or slow waters with relatively low oxygen levels.

MDC staff verified Rich’s record-breaking catch on a certified scale in Williamsville. This is the second state record caught in 2021.

For more information on state-record fish, visit THIS LINK.