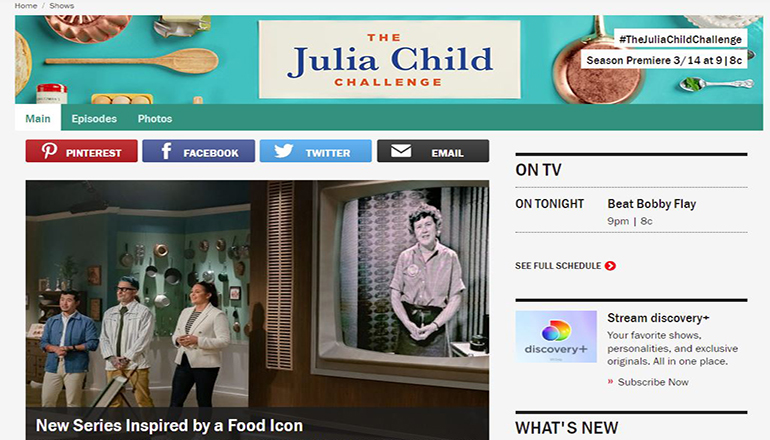 A Chillicothe man will compete on a new cooking show inspired by Julia Child. Dustin Rennells will appear on The Julia Child Challenge, which premieres on the Food Network and Discovery+ March 14th at 8 o’clock at night Central Time.

Rennells says he moved to Boston after graduating from high school in 2000. He went to school for arts and education and got into event planning and food service. He was able to expand his talents that had developed while he was in Chillicothe.

Rennells says he had a private catering company for a while as well as a cupcake delivery service.

While growing up, he loved going to Francine’s Pastry Parlor in Chillicothe. He took over the business and has owned it since December. He renamed it The Parlor Bakery and Cafe. He notes it is basically a continuation of what Francine Davenport had. Owning the business fulfilled Rennells’s dream of owning his own restaurant, bakery, and cafe.

He says The Julia Child Challenge was his first experience competing with others who also love cooking. He was happy to be selected and be one of the eight original competitors. He hopes the show will continue, so more people can experience it and honor Julia Child.

Rennells describes the show as cooking in the world of Child.

Rennells calls himself a Julia Child superfan. While growing up, he watched her and recreated some of her dishes. He would pretend to host his own show.

He met her at a movie theater in Cambridge, Massachusetts.

Rennells says the challenge was filmed last summer at a location with ties to Child. He comments he cannot tell the location, so he does not spoil the show for viewers.

He found out he would be on the show a few days before being on it. He believes he was found through TikTok.

Rennells says the judges for The Julia Child Challenge came from different aspects of cooking. They included food critics, restaurant owners, and people from other Food Network shows.

A winner will be announced at the end of The Julia Child Challenge. Rennells says the prize package includes being able to learn as Child did in France.

When the show premieres on the Food Network and Discovery+ March 14th, Dustin Rennells will be excited to see what will be shown of what happened with the competition.

(Photo is a screenshot of show information on Food Network website)