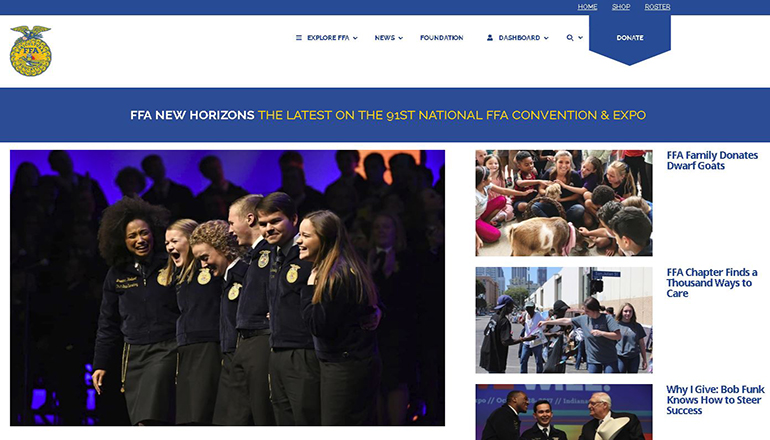 FFA members from across the state will meet in Columbia, April 25-26, at the 91st Missouri FFA Convention to honor fellow members for outstanding achievements, conduct association business, elect new officers and participate in leadership workshops. For the first time, convention sessions will be viewable at https://Livestream.com/MoDESE/MoFFA.

“Cultivate Tomorrow, Today” is the theme for this year’s annual convention, which is expected to attract more than 8,000 students and guests to Hearnes Center on the University of Missouri campus.

According to Missouri FFA Executive Secretary Keith Dietzschold, the state association will present State FFA Degrees to 760 members who, as a result of their agricultural and leadership achievements, have qualified for the state’s highest FFA degree. Dietzschold also said Missouri has the largest number of American FFA Degree recipients of any state – 518 Missouri FFA members received the American FFA Degree in 2018 during the national convention held in Indianapolis, Indiana, in October.

FFA members also will participate in a number of organization program areas including speaking competitions and career development events such as agricultural sales, floriculture, and livestock judging.

The Distinguished Service Citation will be presented to Don Fuhrmann of Hillsboro. Fuhrmann started working as a lifeguard in 1978 at Missouri FFA Camp Rising Sun. His position grew to include boat mechanic, ski instructor, lifeguard trainer, boating instructor, and waterfront supervisor. Fuhrmann taught art at Hillsboro High School for 32 years. He also coached football, wrestling, and track. After retiring in 2005, he continued to work with the wrestling program and was recently honored with the Hillsboro Wrestling Tournament being renamed the Don Fuhrmann Duals.

Four FFA chapters will be chartered during the Thursday evening session. The new chapters are Oak Ridge, Valley Caledonia, Newburg, and East Carter.

During the first general session Thursday afternoon, Christopher R. Daubert, vice chancellor and dean of the University of Missouri College of Agriculture, Food & Natural Resources, Columbia, will welcome convention attendees. Prior to joining MU in August 2017, Daubert was at North Carolina State University, Raleigh, North Carolina, where he served as a professor and head of the Department of Food, Bioprocessing, and Nutrition Services; director of the Food Rheology Laboratory; and system co-chair of Food, Biochemical and Engineered Systems. Daubert has served as editor-in-chief of the Journal of Texture Studies, is on the editorial board of the Journal of Food Process Engineers and is a fellow of the Institute of Food Technologists. He has received distinguished alumnus awards from Pennsylvania State University, University Park, Pennsylvania, and Michigan State University, East Lansing, Michigan. He earned a doctorate in agricultural engineering and food science from Michigan State University.

National FFA Western Region Vice President Shea Booster, a member of the Bend FFA Chapter, Bend, Oregon, will speak during the first session. In high school, Booster’s SAE focused on hog production. He was the 2016-17 Oregon State FFA president. Booster is a sophomore at Oregon State University, Corvallis, Oregon, where he is studying agricultural business management. Booster’s goals include being in a leadership-development or communications position with an agricultural company and eventually taking over his father’s leadership-consultation company.

Also during the first session, Missouri Director of Agriculture Chris Chinn will speak. Chinn, named to director January 2017, resides on her family farm in Shelby County with her husband and two children. The Chinns have a farrow-to-finish hog operation; a small cow-calf herd; raise corn, soybeans, and alfalfa; and operate a family feed mill.

During the Thursday evening session, Missouri Commissioner of Education Margie Vandeven will address the convention. Vandeven joined the Department of Elementary and Secondary Education in 2005 as a supervisor of the Missouri School Improvement Program before becoming the director of Accountability Data and School Improvement, an assistant commissioner in the Office of Quality Schools and as deputy commissioner of the Division of Learning Services. She was appointed the commissioner of DESE by the Missouri State Board of Education in December 2014 and served until December 2017. She was reappointed in January 2019.

During the Friday evening final session, Vietnam Veteran and Purple Heart Recipient Dave Roever of Fort Worth, Texas, will share a story of survival and inspiration. At the height of the Vietnam War, he joined the U.S. Navy and served as a river boat gunner in the elite Brown Water Black Beret. Then tragedy occurred. Today, Roever travels the globe, speaking at national conventions, public schools and to U.S. military audiences, including in war zones. Since 2007, Roever and his team have run Operation Warrior RECONnect at the two Eagles Summit Ranches near Westcliffe, Colorado, and Junction, Texas.