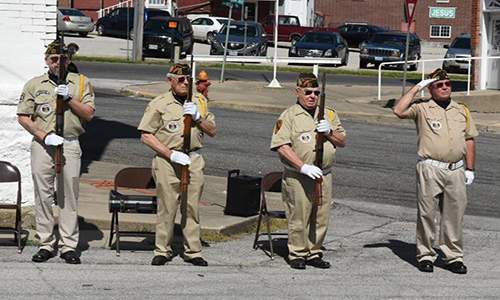 While VFW members were hoisting the U.S. flag out in front of the Baker one-room school, VFW Commander at Trenton, Don Altes, was the bugler.  Officer of the day was Sam Smith who gave the commands for three VFW members to conduct the rifle salute.

Persons attending also recited the Pledge of Allegiance. Emcee for the ceremony was Bob Chenoweth.

Vietnam era stories were delivered at the Masonic Hall, across Mable street, from the Museum. Speakers include Ton Ralston, Don Altes, and Sam Smith.

Two hundred fifty pieces of art are on display in the main museum, Baker school, and the annex.

“Grundy County Artists and Art” is the theme for the displays. Two rooms of the annex, across Tinsman Avenue from the museum, have many of the displays from last years’ feature exhibit remembering the 50th anniversary of the Vietnam War.

The museum buildings are open regular hours 2 to 5 weekends and holidays.