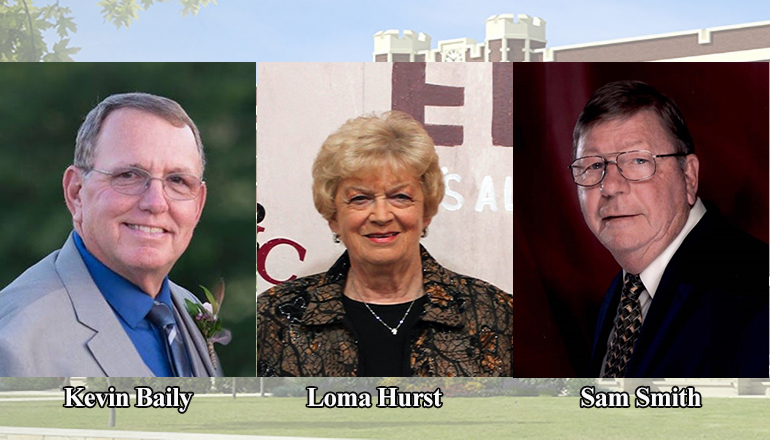 Kevin Bailey attended Trenton Junior College from 1974-75 taking general education courses before transferring to Missouri Western State College where he earned a B.S. in Business Administration/Management in 1978.  He began work at Trenton Municipal Utilities in 1980 and retired in 2018 after nearly 38 years.

Kevin earned his Eagle Scout award in 1971 and began as an adult leader in 1993.  Kevin currently serves the Pony Express Council as Council Commissioner and as a mem­ber of Council Executive Board. He has received a 30-year veteran service award as well as the Ma-Has-Kah District Award of Merit. In 2007, he earned the Silver Beaver award, an award that recognizes registered Scouters of exceptional character who have provided distinguished service within a council. The Silver Beaver Award is the highest honor bestowed on an adult leader by the council.

Kevin was inducted into the Tribe of Mic-O-Say (the honor camping society of Camp Geiger in St Joseph) in 1969 as a youth and served that organization as an assistant district dance director for nine years. He was elevated to the rank of Sachem in 2004, the rank of Medicine Man in 2013, and to the rank of Chieftain in 2018. He is a founding member and President of the Trust for the Benefit of Grundy County Scouts since its inception in 2004.

Kevin and his wife, Cathy, have three sons that are Eagle Scouts as well as Keepers of the Sacred Bundle in the Tribe of Mic-O-Say; Kasey (Krista), Mitchell (Abigail) and Jason (Av­ery). All three sons attended NCMC and received degrees before transferring to Northwest Missouri State University. Two of their daughter-in-law’s also received NCMC degrees and the Bailey’s have five grandchildren.

Loma (Cooper) Hurst graduated from the Chillicothe Business College in 1944 and then completed 42 hours at Trenton Junior College. Loma began her professional career at Trenton Junior College as a secretary and then as an assistant to Gean Porter, Dean of Vocational and Technical Education. Loma helped to develop vocational/career programs including the nursing program, the agriculture program, and the secretarial science program. After Dean Porter’s retirement, Loma became an assistant to Dan Al­ley, Assistant Dean and Vocational Director, and helped in the development of the accounting program and various computer programs. At the time of her retirement in 1992, Loma served as placement advisor and the placement rate of occupational education graduates reached 99%, the highest in the state.

Loma has been an active member of her community and the state of Missouri by her mem­bership in various organizations and her service on numerous boards and committees.  State leadership included 14 years as a member of the Missouri Vocational Association and 25-year member of the Missouri Community College Association and Executive Board President from 1985-1986.  She has been a member of the Grundy County Retired Teachers Association since 1991 to present and received the Regional Distinguished Retiree Award in both 2007 and 2008. Her volun­teer service includes Wright Memorial Hospital Physicians Clinic and the Church Women United Thrift Shop.

Loma was blessed with three sons; Gary, Jim (Mary) of Burlington, WI and Ron (Marsha) Hurst. Her oldest son Gary died in 2015. She is grandmother to 9 grandchildren and 19 great-grandchildren.

John Sam Smith enlisted in the US Marine Corps after graduating high school where he served 13 months in Okinawa, Vietnam and other Asian military bases. While serving in the Corps, Sam married Catheryn (Cathie) Higdon in 1967. He later obtained the rank of Sgt. by Meritorious Mast (job excellence award) and received two other Meritorious Mast during military service and mus­tered out in December of 1970.

Following military service, Sam attended Trenton Junior College and in September of 1971, he attended Grand River Technical School in Chillicothe receiving his degree in automo­tive technology. Sam used his degree from GRTS and became the Service Manager for the Nisbeth-Seidel GM Dealership. In September 1973 he established and taught the auto mechanics program in the South Harrison School District in Bethany until May 1976. During this time, he finished his Associate of Applied Science degree at NCMC graduating in May of 1974. Sam was the first member of his family to attend college.

While teaching auto mechanics at GRTS he finished his Bachelor of Science in Education at Truman State University in Kirksville graduating in 1980. From January 2005 to present Sam does contract training for area dealerships.

The North Central Missouri College Foundation is a 501(C)3 tax-exempt organization formed in 1986 to raise private funds for the college and to form an alumni association. Since its inception, it has raised money for the construction of a community center/gymnasium, an allied health building, two residence halls, tennis courts, paved parking lots, a farm campus and the renovation of existing campus buildings. Money raised through the foundation also funds scholarships, a student worker program and campus beautification projects. The Foundation Board is made of up TJC/NCMC alumni, business and community leaders and friends of the college, all who support the objectives of the Foundation and the mission and vision of NCMC.  To learn more about the NCMC Foundation visit, www.ncmissouri.edu/alumni or contact NCMC Director of Development Alicia Endicott at 660-357-6403.