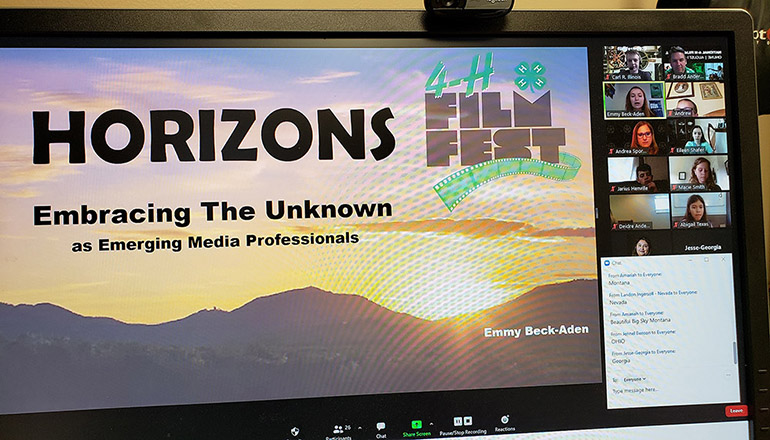 Pursuing their silver screen dreams in an age of pandemic, 4-H youth from 17 states — including eight from Missouri — gathered online the first weekend of August for FilmFest 4-H. Now in its 10th year, this national film festival celebrated its decade-long run with the film industry workshops and youth-produced films it is known for.

Los Angeles-based actress Linara Washington shared strategies from her career working on TV series like “NCIS” and “Grey’s Anatomy,” and in films alongside Brad Pitt and James Gandolfini.

“This business is tough, with more no’s than yes’s,” Washington told 4-H’ers during the live video-conferencing call. “Surround yourself with people who believe in you and stay connected with them.”

“Mark and Erin truly brought the characters to life, even better than I had envisioned,” Shafer said. “The whole time they were performing I kept thinking, ‘Wow, this is really happening!’”

Through the support of the Missouri 4-H Foundation and partnership with the Missouri Film Office, FilmFest 4-H has engaged over 550 youth from 28 states over the last 10 years, said state 4-H specialist Bradd Anderson. Among them was Emmy Beck-Aden, who returned this year to share tips on planning the next career steps in high school and college. Now a media production major at High Point University, Beck-Aden serves as communications director for a North Carolina senate campaign, director of news for a student-run broadcast, and is directing a documentary. She credits FilmFest 4-H for launching her on her current career path.

Missouri winners and participants were:

Animation: Eileen Shafer from the Clover Crusaders in Cole County, for “Hiss”

One-Minute Movie: Malachi Mitchell with 4-H Youth Futures club in Jackson County, for “The Drummer” and Gage Casanover of St. Peters, Missouri, for “Are You Ready Yet”

Other Missouri participants were:

For many, involvement in FilmFest starts with their initial exposure to a 4-H club project. For instance, Mitchell took graphic design and film-making projects as part of his 4-H Youth Futures experience. Now he is headed to college, planning to major in graphic design.

“Being part of 4-H Youth Futures has helped Malachi reach his goal. He is very dedicated to his craft and has grown over the last two years from knowing nothing about college to being fully prepared today,” said club leader Isha Williams.

“I am so proud that we had such a successful transition to an online event,” said Missouri Film Office Director Andrea Sporcic, who created the event with Anderson in 2011. “It was fun to see the enthusiasm translate through computer screens and the connections being made.”

Other FilmFest 2020 top finishers by category are:

History in a Nutshell by Colton Loving (Arkansas 4-H)

Too Many Zucchini by Mason Deen (New Mexico 4-H)

Steve & Alex In: Too Much of a Good String! by Landon Ingersoll (Nevada 4-H)