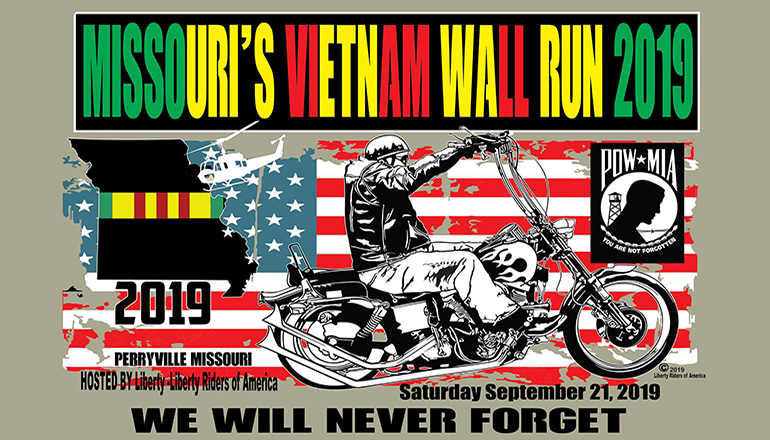 Veterans In Defense of Liberty’s® (ViDoL) Board of Directors voted unanimously in favor of Liberty Riders of America™ (LRA) taking up the torch for the Midwest that was carried faithfully by Rolling Thunder, Inc® on the national level for 32 years. The affirmative vote authorized Liberty Riders of America™ to organize and coordinate the inaugural 256-mile ride from Springfield, MO to the Vietnam Memorial Wall in Perryville, MO. Future Rides will take place annually on Saturday immediately following “The United States’ National POW/MIA Recognition Day,” which is on the third Friday of September each year.

Recalling the words of Calvin Coolidge, “The nation which forgets its defenders will be itself forgotten.  Dr. William S. Magill, president, and Executive Director stated, “Missouri’s ‘Sister Wall’ is identical to the one in Washington D.C., a permanent, full-sized Vietnam Veterans Memorial.  It will provide millions of Americans, including veterans,  who cannot go to Washington, D.C., the opportunity to experience the power the Wall has on national healing, remembrance, and honor. It is a fitting tribute to our brothers and sister who freely gave their lives for freedom, as well as our POW/MIA, with the same solemn celebration of their service and sacrifice as we have in Washington for the past 32 years.  We will always remember, and we will always ride for them and the moral example they embody. Ut Prosim – that I may serve, de oppresso liber – to free the oppressed.”

On Saturday, September 21, 2019, at 0800 hrs, we anticipate 400-500 motorcycles will go Kickstands up launching the “1st Annual State-Wide Missouri Vietnam Wall Run 2019.”  Accompanying Bikes and other vehicles will be a tour bus provided for Vietnam veterans who cannot otherwise make the trip. A total of 12 law enforcement motorcycles will escort the ride; eight from Springfield Police Department, two from Joplin Police Department and two from the Missouri Highway Patrol. Joining the core group along the route will be groups from Kansas City, Saint Louis, Illinois, Iowa, Arkansas, Oklahoma, and other states. Also joining the ride will be those participating in the Perryville, MO “Bikers on the Square” event.

Many towns along the route are making plans to turn out their communities in full fanfare, with overpass and roadway demonstrations of support that will include citizens and firetrucks with flags, as well as police and other emergency vehicles.

The Missouri Highway Patrol anticipates some 5,000 motorcycles or more at the Vietnam Memorial Wall for the official event. This historical ride is open to all who wish to honor America’s POW/MIA and Vietnam veterans.

Governor of Missouri Mike Parson will be presenting a state Proclamation to Veterans in Defense of Liberty®. Major General James E. Livingston USMC (Ret) Medal of Honor, will be the keynote speaker.