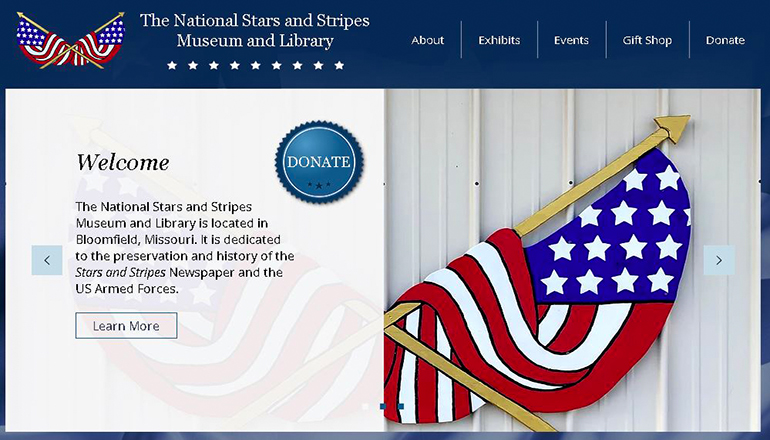 Not many Missourians know that the U.S. military’s daily newspaper, Stars and Stripes, was founded here on Nov. 9, 1861. Union soldiers occupying the town commandeered the printing press of the Bloomfield Herald and issued a four-page newspaper with that title.

The newspaper proved to be a morale booster for troops away from their families, and other issues were printed during the war in Thibodaux, Louisiana, and Jacksonport, Arkansas.

Native Missourian John J. Pershing, commander of the American Expeditionary Force in World War I, knew of the Civil War publication and revived it to boost troop morale. Seventy-one weekly issues were published from Paris.

Then, in World War II, Gen. Dwight D. Eisenhower became the biggest supporter of Stars and Stripes. Like Pershing, he saw it as a morale booster for the troops. After the Allies won the war, Stripes continued to publish in Europe to serve the occupying forces there, and a new edition was started in the Pacific for the same reason.

Today, it is a tabloid with an average of 32 pages daily. Four print editions serve Europe, the Middle East, Japan, and South Korea. There also are seven digital editions, but the printed newspaper remains hugely popular with our troops, particularly in war zones where internet access and cellphone service are either non-existent or often interrupted.

Citizens in Bloomfield have created a remarkable museum that focuses on all periods of the newspaper’s existence. Included in its collection is a copy of the original issue from 1861, numerous photos from the many conflicts the paper has covered and hundreds of other artifacts donated by former staffers and the Stars and Stripes central office, now located in Washington.

The Bloomfield museum is one of the stops on the Civil War Missouri Passport Program (mo-passport.org) that leads visitors to Civil War sites of historic significance within the state.

The museum is seeking to ensure its future with a major fund-raising campaign. The first event in that campaign will be a Spirit of Democracy celebration from 6 to 9 p.m. on Saturday, Nov. 16, at the A.C. Brase Arena, 410 Kiwanis Drive in Cape Girardeau. Missouri Gov. Mike Parson and current Stars and Stripes publisher Max Lederer will be the featured speakers.

Tickets for the dinner event are $100 a plate, and tables may be sponsored for $1,000. For more details, see the National Stars and Stripes Museum and Library website at starsandstripesmuseumlibrary.org.