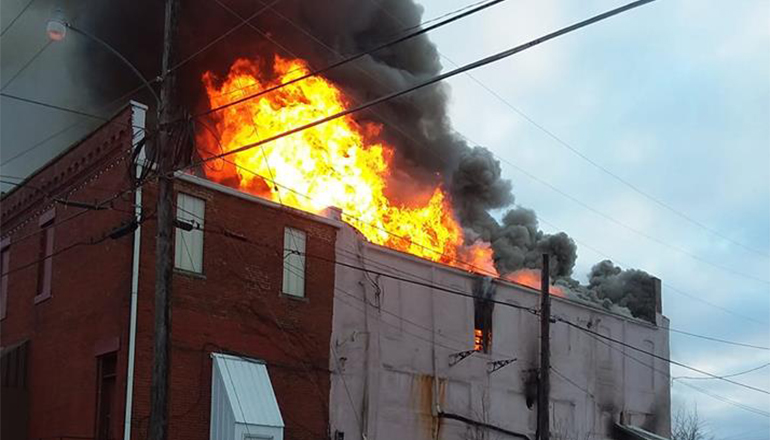 Multiple fire departments responded Monday afternoon to a fire that caused most of two buildings to collapse in the 600 block of Main street. A west wall remained upright. A third building remains standing but the extent of damage is unknown. The location is across from the Law Enforcement Center in downtown Trenton.

Destroyed were This n That Pawn Shop and antiques; and the Cuts and Curls beauty shop. The Trenton chamber of commerce and state license bureau has sustained damage. The three buildings were adjacent to each other.

This morning at 5 am, smoke was readily seen from the rubble and occasional flames were observed from the rear of the rubble.

Gibler noted the Trenton Fire Department received the call just after 4 o’clock Monday. Firefighters found extreme heat and heavy smoke upon arrival. Firefighters began to fight the fire with an interior attack. But when there was a partial structure collapse, firefighters were forced to withdraw and began to attack the fire from the exterior.

Trenton’s ladder truck was set up to provide an elevated stream of water onto the burning two-story buildings. The Chillicothe Fire Department provided mutual aid with its aerial truck. Princeton had offered a ladder truck but crews were almost at capacity with the water flow. Other departments assisting Trenton were Grundy County Rural, Jamesport and Laredo.

City Administrator Ron Urton reported firefighters could not get the fire hydrant at 8th and Main to open. However, they were able to open the hydrant across the street by the Plaza Apartments. He noted both hydrants are on the same pipe.

There are detour signs in the downtown area due to the fire. The intersection at 9th and Main is closed. Main street itself is closed prior to the 500 block. The Trenton Police Department is requesting motorists follow the signs to detour around the fire scene and AVOID that portion of the downtown Trenton area. Traffic is diverted at 9th and Washington, to travel Washington, then to 4th Street and on to Highway 6.  Electricity also was shut off about 5:45 in the vicinity of the fire scene.

Gibler was unsure if anyone was inside the building when the fire started. Bystander Jeremy Fulk said he saw a woman run of Cuts and Curlz about 4 o’clock and saw flames at the time. He saw a police officer come out of the Law Enforcement Center, Fulk pointed at the flames, and the officer went back into the building. A few minutes later, Fulk said fire crews started arriving.

The cause of the fire has not been determined and in a written statement, Chief Gibler said he could not comment further due to an ongoing investigation. The state Fire Marshals have been notified and is conducting an investigation.

As of 8 o’clock Monday night, Gibler told KTTN he could not officially say whether the Chamber of Commerce building was a total loss because he was not able to checkthe bottom floor as of that time. Chamber President Debbie Carman told KTTN early on Tuesday that the Chamber of Commerce office and the state license bureau will be closed until another location can be found and will be announced.

No injuries were reported in the incident and it was noted the Chamber of Commerce and state license bureau were closed Monday due to the President’s Day holiday.