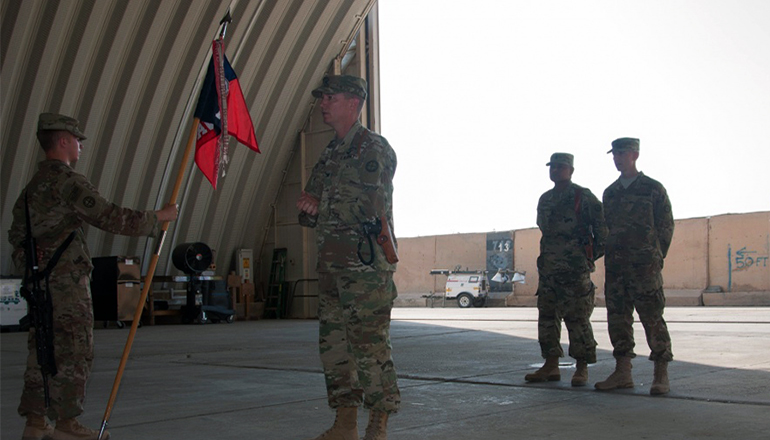 The Soldiers assigned to Headquarters and Headquarters Company, 35th Combat Aviation Brigade, from Sedalia, Missouri, arrived in Iraq approximately one month ago.

Their duties throughout this deployment include providing command and control for combat aviation operations in support of both Operations Inherent Resolve and Spartan Shield. Due to the nature of their mission, the Soldiers assigned to locations across Iraq have now earned the right to wear a combat patch on their right arm.

“The symbolism recognizes an achievement for Soldiers and their sacrifice to our country,” said U.S. Army National Guard Command Sgt. Maj. Javier Acosta, the senior enlisted leader assigned to the 35th CAB. “The patch ceremony additionally signifies a sacrifice of family members and their support for their Soldier. The patch on the right arm tells family, civilians and fellow Service members that this Soldier has been tested and endured hardships for our allies and our nation’s security, interests and values.”

The time-honored tradition, beginning in World War II, acknowledged the sacrifices of Soldiers who have given their lives for the country. Now, the patch distinguishes Soldiers who have served in an area of combat.

“Getting a deployment patch is a rite of passage in a lot of ways, but it meant so much more and was very humbling to have received it on 9/11,” said U.S. Army National Guard Sgt. Bridget Fohey, a human resources non-commissioned officer assigned to HHC. “The ceremony was very emotional and made me really reflect on why I do this job and who I am doing it for.”