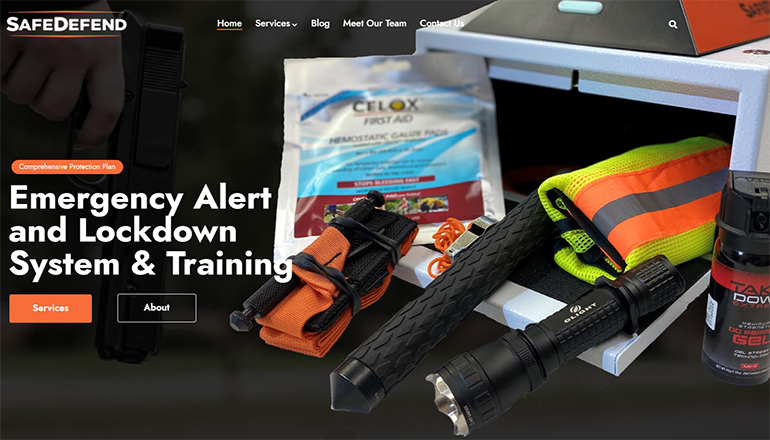 The Trenton R-9 Board of Education on December 14th heard about the implementation of the SafeDefend system for the district.

Law enforcement members from the city, county, highway patrol and fire department were entered into the system to receive a notification when the system is activated.

Stegman hopes the district will never have to use SafeDefend. He explained the purpose of the system is to keep students and staff safe. The police would deal with an intruder.

He noted if there was an imminent threat in a classroom, like with a student, the system could be activated.

The health department is in charge of quarantines.

Stegman stated Trenton R-9 had some positive cases. He commented that if a student has symptoms, he or she can still be sent home.

He noted it is the parents’ responsibility to monitor and quarantine students.

Trenton High School Principal Kasey Bailey reported on the Guidance Program Evaluation. He said an internal improvement review did not find any areas of concern. The percentage of implementation for six elements were all 93% or above. Those elements were program foundation (99%), systems support (96%), school counseling curriculum (93%), individual planning (100%), responsive services (99%), and complete internal improvement review (97%). Any score between 90 and 100% is considered a fully implemented comprehensive school counseling program.

Instructional Coach Jill Watkins gave an update on what she has worked on in the last month. She is working on two Missouri Teacher Development System grants.

Watkins is collaborating with Bailey to prepare a Grow Your Own Teachers Program proposal. The proposal considers opportunities for paraprofessionals and substitutes to work toward teacher certification. It also considers an extension of the district’s Cadet Teaching program through Future Teachers of America and North Central Missouri College to provide extended opportunities for high school students to engage in teacher education programs while in high school.

Watkins sent a survey to Trenton R-9 faculty and staff members to determine areas of importance regarding teacher recruitment and retention. The survey closed on December 10th and had 83 respondents. She said data from the survey will be used to create a district-wide plan with strategies, action steps, a budget, and data tracking.

Watkins reported work on dyslexia protocols and a flow chart for Trenton R-9. She said the Barton Program the district uses for dyslexia is a 12-level system, and it can take up to two years to complete. The program could serve students through high school.

Students in kindergarten through eighth grade are screened for dyslexia. DESE provides behavioral indicators of students at risk of dyslexia. Watkins noted there is an intervention for dyslexia, and it is not special education.

Election filing dates were reviewed for the April 5th election. Interested individuals can file at the Trenton R-9 District Office during regular business hours. Except for fro the first and last day of filing, filing will not occur on days when the office is closed due to inclement weather. Filing during winter break from December 22nd and 23rd will be from 8 o’clock to noon. The office will be closed on December 24th, 25th, and 27th. Filing will end on December 28th at 5 o’clock in the evening.

The three-year terms of Dorothy Taul and Marcie Cutsinger will expire at the April board meeting as well as the term of Jason Hostetler. Four candidates have filed for the two three-year terms: Taul, Jeffrey Spencer, Toby Havens, and Joshua Shuler. Hostetler has filed for a one-year term.

The Trenton R-9 Board of Education approved a final audit completed by Conrad and Higgins, LLC. Mark Higgins reported there were no federal findings, there were no issues, and the district is headed in the right direction.

Superintendent Mike Stegman reported the yearly audit makes sure the district is dealing with money properly. It will be sent to multiple entities and makes a difference in seeing if Trenton R-9 is worthy to have bonds if the district wants them in the future.

Higgins noted the audit is a public document and will be submitted to a federal clearinghouse.

The board approved a Department of Elementary and Secondary Education Postsecondary Counselor Grant. Funding for the Missouri Postsecondary Advising Initiative would be provided through DESE, and DESE will be responsible for handling reimbursements and financial aspects of the initiative. Ozarks Technical Community College will collaborate with the rootEd Alliance to assist in advisor training and program evaluation.

High School Principal Kasey Bailey reported the grant would specifically be used for counseling for students for college and careers. The person who fills the grant-funded position would advise juniors and seniors.

Stegman noted it would be a three-year grant, and there is a training process. Bailey commented training would start in February.

Summer school for 2022 was approved. Stegman said it will be the second year of a three-year agreement with Catapult. The district will look for someone to manage the summer school program at Trenton.

The board approved the Missouri School Boards Association John T. Belcher Scholarship. Morgan King is Trenton R-9’s recipient. Stegman noted the board reviewed the scholarship applications without the students’ names, and King’s was chosen.

Stegman said she would be eligible to compete at the state level.

Another policy was adopted last month and involved school board elections. Changes were made to the policy. Stegman reported the MSBA had notified the district, that in the last month, the Missouri Supreme Court ruled a section of the policy was unconstitutional. The update included the changes from last month’s update, except those made to the “No Election Held” section.

The board entered into a closed session for personnel matters.