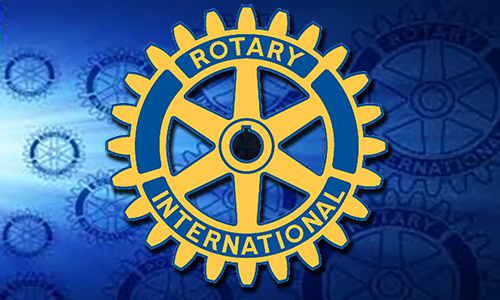 Former Trenton resident Steve Maxey spoke at the Trenton Rotary Club meeting on July 1st. He is a sales manager for the Hy-Vee Arena in Kansas City, which was previously the Kemper Arena.

He gave the history and personal stories of the former Kemper Arena, which hosted events including the 1976 Republican National Convention, the NCAA Final Four, professional basketball, hockey games, concerts, horse shows, the Ice Capades, and pro wrestling. Maxey said the arena saw a decline in activity since the Sprint Center was constructed in Downtown Kansas City, and the Kemper Arena closed.

A group of private investors reopened the arena in 2018. It currently has more than 82,000 square feet of space, including 12 hardwood courts for basketball, volleyball, and pickleball. It also has a 350-meter Mondo indoor track, a food court, retail outlets, and offices.

Maxey’s responsibilities at the Hy-Vee Arena include being the director of the Twelve Days of Christmas, a multi-state high school basketball shoot-out scheduled for December. Maxey said he was reluctant to assume the directorship after his retirement from a similar position at Holiday Hoops on the North Central Missouri College campus in Trenton. The Kansas City event had been planned for more than a year and needed someone to take on the leadership.

Maxey explained his new venture is scheduled to host more than 118 teams from 82 high schools in Missouri, Kansas, Iowa, Nebraska, and Oklahoma. Officials hope to see as many as 3,000 student-athletes and more than 20,000 fans during the event.