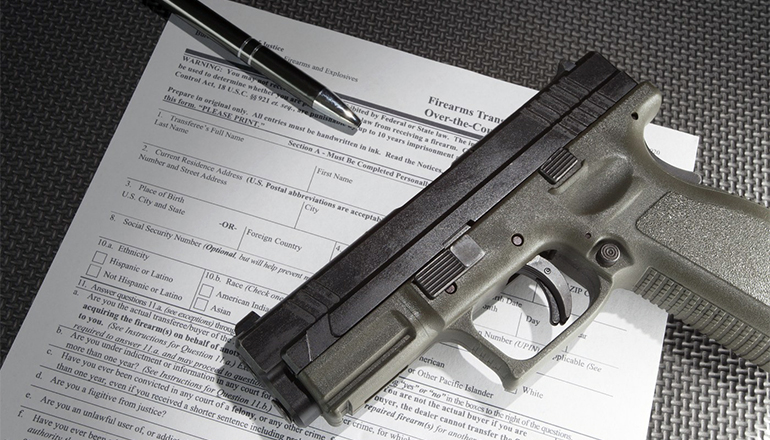 A Lee’s Summit, Missouri, man who illegally purchased 15 firearms pleaded guilty in federal court to illegally possessing firearms and to making a false statement on a federal form in order to purchase those firearms.

Jay C. Miller, 28, pleaded guilty before U.S. District Judge Howard F. Sachs to one count of possessing firearms while being an unlawful user of, and addicted to, heroin and other controlled substances. Miller also pleaded guilty to one count of making a false written statement on a federal form, falsely claiming that he was not an unlawful user of, or addicted to, any controlled substance, in order to purchase a firearm from an Independence, Missouri, pawn shop.

By pleading guilty, Miller admitted that he illegally purchased, or attempted to purchase, more than 15 firearms from five licensed firearms dealers from Sept. 29, 2016, to March 19, 2018.

On Oct. 15, 2016, Independence police officers were dispatched to a reported disturbance at the Independence Mall. Officers contacted Miller in the parking lot; he had a Canik TP9SA in a holster on his hip. Miller was arrested for disorderly conduct and the firearm was seized. During an inventory of Miller’s vehicle, officers found a Glock 19 in the center console, sitting next to a loaded syringe. Three fully loaded 15-round Glock 9mm magazines were found in the glove compartment.

On Aug. 31, 2017, Lee’s Summit, Missouri, police officers responded to a shots fired call at Miller’s residence. During a search, officers found an M&P15 rifle with a 30-round magazine with 25 rounds, .223 caliber casings, a 15-round Glock magazine loaded with 15 rounds, one orange needle cap, a spoon with brown residue that field-tested positive for heroin, and a used syringe containing .55 grams of red dark liquid. A detective attempted to interview Miller but was unable to do so because he was under the influence of a controlled substance.

On Sept. 19, 2017, Lee’s Summit police officers executed a search warrant at Miller’s residence and found 11 syringes with residue and a small plastic bag with residue. Miller admitted to being a heroin user, starting in 2013. As of June 2017, he was using heroin every day or multiple times a day. Miller further admitted to selling heroin to his friends 10 to 15 times. Miller admitted to shooting the M&P15 at another individual on Aug. 31, 2017. He also claimed to have had 10 firearms stolen from him.

On May 16, 2018, Lee’s Summit police officers responded to a shooting at Miller’s residence. Miller got into an argument with another individual and a physical altercation ensued. During this altercation, the other individual was shot in the chest. Officers searched Miller’s residence and found a Glock 27 pistol and a Russian American Armory Saiga 7.62 x 39mm rifle underneath the back porch.

Under federal statutes, Miller is subject to a sentence of up to 20 years in federal prison without parole. The maximum statutory sentence is prescribed by Congress and is provided here for informational purposes, as the sentencing of the defendant will be determined by the court based on the advisory sentencing guidelines and other statutory factors. A sentencing hearing will be scheduled after the completion of a presentence investigation by the United States Probation Office.