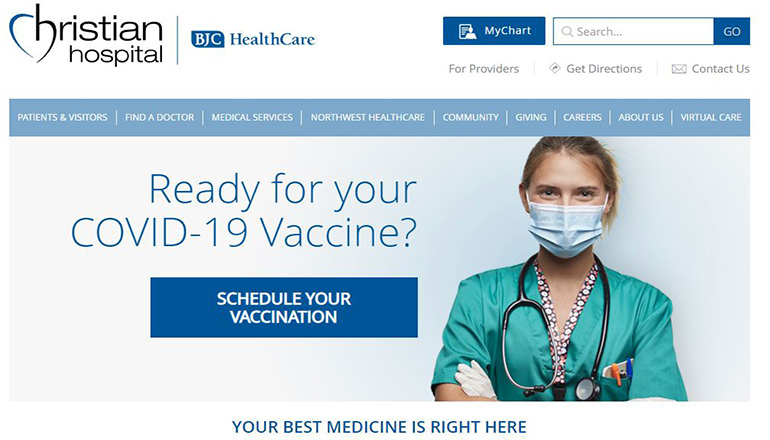 (Missouri Independent) – St. Louis hospitals straining to keep up with a record-breaking number of COVID-19 cases will get some relief in the form of a military medical team.

A 40-member team will begin arriving at BJC-Christian Hospital in North St. Louis County on Wednesday, a news release from BJC HealthCare stated. The St. Louis Metropolitan Pandemic Task Force had sought help through the State Emergency Management Agency for help at 11 hospitals in the metropolitan area.

“In addition to the impact from overwhelming numbers of COVID patients, providing resources to underserved communities was a critical factor in the decision to choose Christian, located in North County, as the facility to receive this aid,” the release stated. “The hope is that by adding resources to North County, other facilities will benefit as well.”

While he wouldn’t give specific numbers of cases in his hospital, Christian president Rick Stevens said it will help cover for about 100 staff who are out sick and currently being replaced by temporary help or the BJC central pool of employees.

“North County has been hit in the St. Louis region the hardest with COVID patients, Stevens said. “We have a high number of patients and we have also had our staff go out sick. It makes for a difficult and tough situation.”

The announcement came just hours after the state Department of Health and Senior Services reported a record 3,784 people were being treated in hospitals across the state as of Tuesday, with preliminary data showing that number increased to 3,938 on Wednesday.

The only area of the state seeing a significant decline in cases over the past seven days is the St. Louis metropolitan area. The biggest drops are in St. Louis and St. Louis County, the only jurisdictions in the region with mask mandates.

The state reported 249 deaths on Friday from an extraordinary review of recent death certificates. That process usually happens once a week and is reported on Tuesdays.

The report added 211 deaths in January, and 35 in December, bringing the total reported so far for those months to 1,231, an average of 24 deaths per day since the omicron variant was detected in the state.

The medical team is a 40-member unit from the U.S. Navy, a release from Gov. Mike Parson’s office stated.

“This team will help support our dedicated local medical professionals who work hard each day to care for Missourians,” Parson said in his release. “The best way Missourians can help aid our hospitals and health care workers is by considering vaccination to protect themselves and their families.”

Each state and the Navajo nation were approved for one team except New York, where two teams will be deployed, the release stated.

The number of patients in ICU beds Tuesday was 711, equal to the highest number of the pandemic, with 724 reported in preliminary data for Wednesday.

The state health department reported that 82 percent of all hospital beds in the state were filled Tuesday, and 83 percent of ICU beds. The lowest share of remaining beds were in St. Louis, Kansas City, and northwest Missouri.

Christian Hospital has a vaccine clinic, a testing center, and monoclonal antibody treatments for those who become infected, Stevens said. The extra help for his hospital will allow patients to be treated close to home and provide relief to the region, he said.

“It allows us to one, care for the patients in an effective and efficient manner, and if others need resources, perhaps we can take on some of those patients,” he said.

In the central part of the state, the University of Missouri Health Care is trying to keep staffing up by requiring licensed professionals who work in non-direct care roles at the School of Medicine cover four 12-hour hospital shifts in the coming two weeks.

The single team is much less than the St. Louis Metropolitan Pandemic Task Force requested from the State Emergency Management Agency.

The St. Louis Post-Dispatch reported on the request earlier this week. The team that was approved is only a fraction of the total request, which included 72 positions for Mercy Hospital Jefferson, 22 for SSM Health St. Joseph Hospital in Lake Saint Louis, and an unspecified number for the region’s other hospitals.

“With every day, we break records in admissions and hospitalizations,” Dr. Alex Garza, SSM Health chief community health officer and co-lead of the task force, said in a news release. “There is no single healthcare system that has not been impacted by this surge in patients with the entire region facing dire situations. Our hope is that our federal partners swiftly deploy resources to help our depleted and demoralized workforce.”

Schmitt warned Tuesday that the lawsuits were coming unless school districts dropped their mandates.

In a news release, Schmitt called school mask rules “illegal,” that they do not work to prevent disease, “and they contribute to alarming and negative psychological impacts on our children. My Office has been on the frontlines of the fight to end the forced masking of children all day in school, and today we took concrete legal action toward that end.”

There are 76 parents acting as plaintiffs in the various cases.

He attempted to get a decision about mask mandates in all districts with a lawsuit against Columbia Public Schools in the fall. Schmitt’s effort to get it heard as a class action against any district with a mask mandate was rejected in September. The lawsuit was dismissed in late December after the district stopped requiring masks.

His office had not put out a release naming all the districts being sued, instead using social media accounts to roll them out individually.

In the opening sentences of each lawsuit, Schmitt asserts that districts cannot require students to wear masks in class.

“School districts do not have the authority to impose, at their whim, public health orders for their schoolchildren,” the lawsuits state. “That is doubly true when the public health order, in this case, facemasks, creates a barrier to education that far outweighs any speculative benefit.”

Requiring students to wear a mask “has no empirical or rational basis; and rejects basic principles of sound public health decision-making, medical science, and statistical analysis,” each lawsuit states.

The mask rule for students in districts that serve Kansas City is the result of an ordinance passed by the City Council.

“Six of the school districts sued today in a clear but unsurprising political stunt educate kids from Kansas City,” Mayor Quinton Lucas wrote in a tweet responding to Schmitt. “The majority of them have school buildings in our city, in which our mask rule continues to apply. We will support our schools, our teachers, and our students.”

Missouri House Minority Leader Crystal Quade issued a news release denouncing Schmitt for suing districts for what she said is a legal use of their authority to run their districts.

“Eric Schmitt’s stunning abuse of power is making countless Missouri kids sick and preventing schools from keeping their doors open,” Quade said. “He is corrupting his high office for political gain and is unworthy of the authority Missourians have entrusted him.”

In the lawsuit against Columbia Public Schools, Schmitt questions whether it is a problem if children get sick from COVID-19.

“COVID-19 is not a serious health risk for the vast majority of the population—and especially for children and young adults,” the lawsuit states. “Rather, the risk of serious negative health outcomes from COVID-19 goes up with age. Thus, children—especially healthy children—do not face a significant risk of serious illness or death if they catch COVID-19.”

In his lawsuit, Schmitt argues that students who wear masks suffer discomfort in the form of headaches, mental and emotional pain and that masks make learning more difficult.

In a statement to the Independent, Columbia schools spokeswoman Michelle Baumstark wrote that the district, and other schools, are focused on keeping classrooms staffed with a safe learning environment.

Columbia is one of 62 school districts that have closed for one or more days to get COVID-19 cases under control.

School districts have the power under state law to control contagious diseases and are taking guidance from the Department of Elementary and Secondary Education, state and local health agencies, and medical experts.

“Filing suits against numerous public school districts for making decisions in the interest of safety and keeping scholars in school continues to waste taxpayer dollars and resources, which are better spent investing in our scholars,” Baumstark wrote. “Columbia Public Schools intends to aggressively defend its decision to do everything possible to keep its scholars and staff safe and its schools open.”

In the fall lawsuit against Columbia schools, the ACLU of Missouri intervened and argued that masks protect vulnerable students who would have a more severe reaction to COVID-19 and they protect adults from infections carried by students.

It may make it impossible for some students with breathing issues or immune disorders to attend schools if masks are banned, Legal Director Tony Rothert wrote at the time.

In one of his tweets, Schmitt cites a September article from the Atlantic by epidemiologist Vinay Prasad, arguing it supports his conclusions that masks are not an effective way to slow the spread of coronavirus.

“No scientific consensus exists about the wisdom of mandatory-masking rules for schoolchildren,” Prasad wrote. “The World Health Organization, which recommends that children 12 and older wear masks under the same circumstances that adults do, specifically advises against masking kids age 5 and younger.”

This story has been updated since it was initially published.