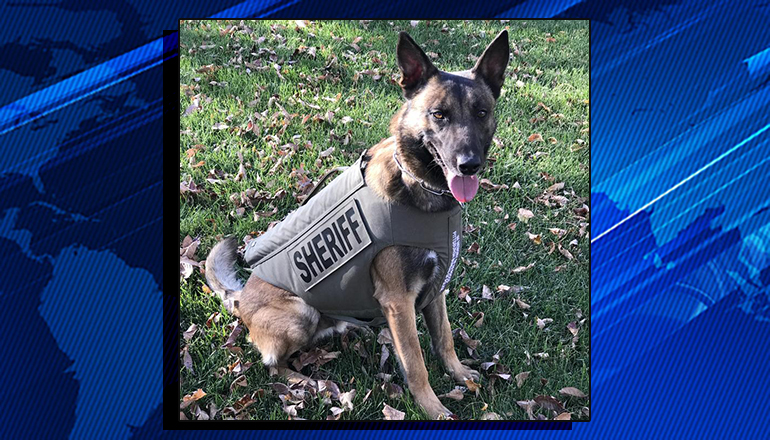 Livingston County Sheriff Steve Cox credits the departments’ law enforcement K-9 with running after a prisoner who fled on foot while at the sheriff’s office in Chillicothe, but stopped once he saw the dog in action.

20-year-old Jeremiah Joel Bailiff of St. Louis was being finger-printed when the alleged escape from custody occurred. Bailiff had been arrested following a law enforcement pursuit of a stolen utility truck that went through parts of Carroll and Livingston Counties. The theft was reported by a business in Marshall.

That chase ended just east of Chillicothe when spike strips were placed near U.S. Highway 36 and Route CC. Bailiff was taken into custody for processing at the Livingston County Sheriff’s Department. After an interrogation of the suspect that included information about two other stolen vehicles, Sheriff Cox said a trooper removed handcuffs from Bailiff in order to complete the fingerprinting. But Bailiff fled out the west door which is an emergency exit at the sheriffs’ office.

Deputy Chris Mueller, the canine’s handler, was close by and observed the suspect running in a southeasterly direction. Zaki, the canine, was in the patrol vehicle. As Deputy Mueller got in position, he used an emergency button to pop open the patrol car door allowing Zaki to exit. Both the deputy and the specially trained dog chased after Bailiff.  However, when Bailiff saw the dog closing for what could have been a takedown, Cox said Bailiff stopped dropped to his knees, placed his hands over his head, and surrendered. Deputy Mueller called off Zaki before the canine could use force in apprehending the suspect.

Sheriff Steve Cox, in making the news release, noted how valuable the canine is to law enforcement. He added that escape charges are sought against Bailiff in Livingston County. Bailiff was charged with the February 17th theft of the truck in Saline County. Following a video appearance Wednesday, February 28, 2018, at Marshall, a preliminary hearing was set for May 2nd in the Associate Division of the Saline County Circuit Court.