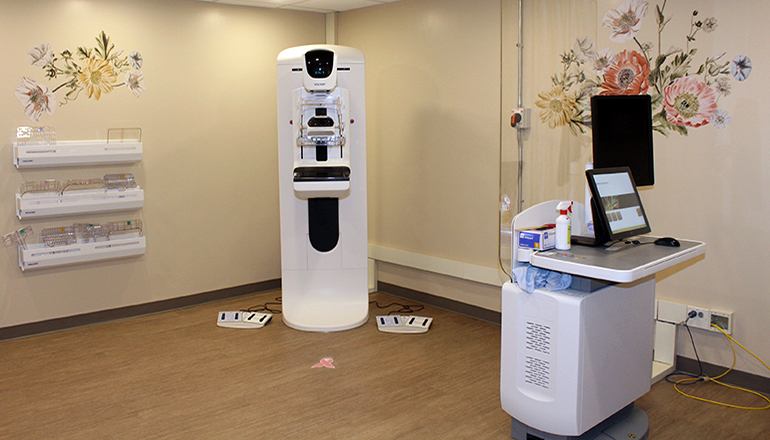 October is Breast Cancer Awareness Month and Carroll County Memorial Hospital offering patients 3D Mammography. CCMH is also offering a $75 cash special for a mammogram during the month of October.

The average risk of a woman in the United States developing breast cancer sometime in her life is about 13 percent. This means there is a 1 in 8 chance she will develop breast cancer.

According to the American Cancer Society (ACS), breast cancer is sometimes found after symptoms appear, but many women with breast cancer have no symptoms. This is why regular breast cancer screening is so important. Early detection means finding and diagnosing a disease earlier than if you’d waited for symptoms to start.

Carroll County Memorial Hospital Foundation assisted the hospital in the purchase of the new mammography unit. One of the foundation’s founding board members, Carolyn D. Lyon, designated funds from her estate to the Foundation for the purchase of equipment for the detection and treatment of breast cancer. Additional funds were collected through a campaign that took place in 2019 and 2020.

“Carroll County Memorial Hospital Foundation is pleased to support the hospital’s mission and the community with the upgrades to our mammography system,” said Rachel Davidson, CCMH Foundation Director. “Carolyn was passionate about the Foundation bringing 3D mammography to this hospital and I believe she would be pleased to see the project complete.”

Breast cancer is the second leading cause of cancer in women. The chance that a woman will die from breast cancer is about 1 in 39, according to ACS. Since 2007, breast cancer death rates have been steady in women younger than 50, but have continued to decrease in older women. From 2013 to 2018, the death rate went down by 1 percent per year. These decreases are believed to be the result of finding breast cancer earlier through screening and increased awareness, as well as better treatments.

“This advancement has been a long time coming for our facility and thanks to our hospital’s Board of Directors and CCMH Foundation, we are excited to see this service become something we can finally offer to our patients,” said Hilary Taylor, BSRS, RT(R)(M)(CT), CCMH Director