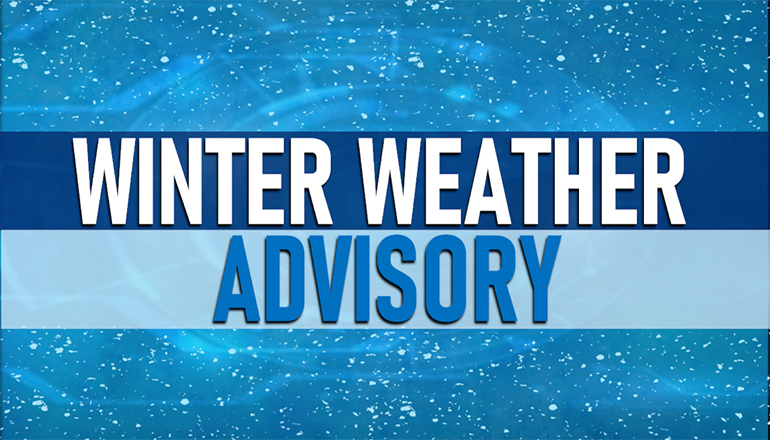 All counties north of Interstate 70 in Missouri, with the exception of Atchison, Nodaway, and Holt counties, are included in a Winter Weather Advisory that will go into effect on Tuesday at 6 pm and continue until Wednesday at Noon.

Snow is expected with a total accumulation of 1 to 3 inches with locally higher amounts possible. Initial precipitation may start as a rain/snow mix but should quickly turn to all snow.

Slick roads can be expected throughout much of the region due to the accumulating snow and changing weather conditions. Road conditions will change quickly and motorists should adjust their speed and driving habits to changing conditions. Road conditions, which are updated frequently, can be checked on the MoDOT Traveler Information Map. Stay home if possible during the storm, as it makes it easier for MoDOT crews to work on clearing roads.

WINTER WEATHER ADVISORY TO GO INTO EFFECT ON TUESDAY EVENING, JANUARY 24 AT 6 PM, CONTINUING THROUGH WEDNESDAY, JANUARY 25 AT NOON FOR ALL COUNTIES NORTH OF I-70, WITH THE EXCEPTION OF ATCHISON, NODAWAY, AND HOLT COUNTIES.

Tonight: Snow, mainly after midnight. Low around 30. Calm wind becoming north-northwest around 5 mph after midnight. The chance of precipitation is 90%. Total nighttime snow accumulation of 1 to 3 inches are possible.

Wednesday: Snow likely, mainly before 9 am. Cloudy, with a high near 33. Northwest wind 5 to 15 mph, with gusts as high as 25 mph. The chance of precipitation is 70%. New snow accumulation of less than a half inch are possible.