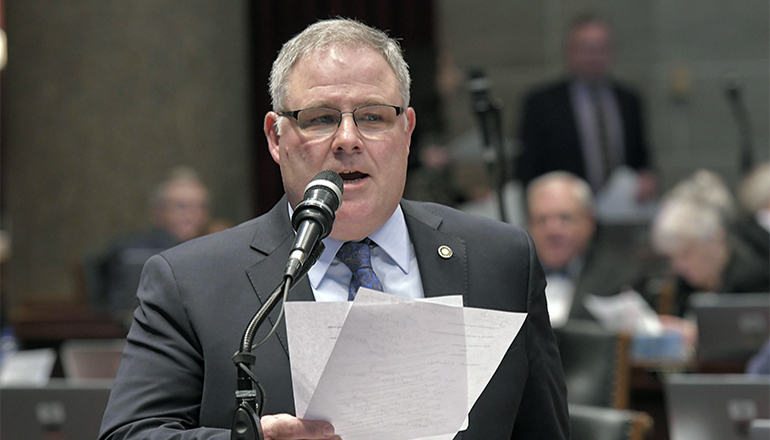 The Missouri General Assembly has been on spring break this week and will reconvene March 21st.

State Representative Rusty Black of Chillicothe says he thinks the House of Representatives did good work in the first part of the session.

Black is in his sixth year as a State Representative. He enjoys being involved with legislative decision-making.

Black reports he supported a bill that was “somewhat controversial,” which is commonly referred to as No Patient Left Alone.

Black calls it “kind of unprecedented” for a piece of legislation to get passed on a Wednesday and be assigned to a committee in the Senate on a Thursday. He thinks there is a chance that at least some form of the bill will be passed.

Black comments there are “all kinds” of U. S. Congressional maps.

With new State Senate boundaries, Black announced he plans to withdraw from running for Seventh District State Representative for the August 2nd Primary Election and file for the 12th District of the State Senate.

He comments the new map is tentative, and it will take a while before it becomes official.

Black says he will be the third person in the race for the 12th Senatorial District. Delus Johnson of Country Club and J. Eggleston of Maysville previously filed. He has until March 28th to file in Jefferson City.

He notes the 12th District will be the largest district in the state.

The State Senate’s 12th District currently includes all of 14 counties and part of Clay County.

Black reports the Missouri House of Representatives also has a new redistricting map. The Seventh House District will include Linn, Livingston, Carroll, and part of Ray counties. Grundy County will be part of the Second House District, which will also include Caldwell, Daviess, Harrison, and Worth counties.

The new State Representative map was approved earlier this year and is official. It will go into effect in January.

Black says the same process was used for the State Senate map.