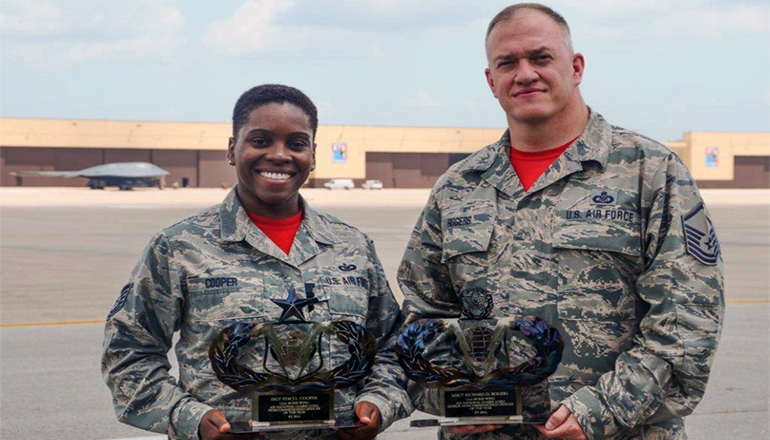 Two aviation resource managers from the 131st Bomb Wing at Whiteman Air Force Base were selected as the Air National Guard Aviation Resource Management award winners in their respective categories.

“The success of the 131st Operations Group is due, in large part, to the dedication of our aviation resource management professionals,” said Col. Jared Kennish, 131st OG commander. “Our aircrews depend on them to ensure accurate aircrew flight data, identify necessary training, and ultimately, ensure the safety of flight.

“I have known Master Sgt. Rogers and Tech. Sgt. Cooper since they joined the Operations Group and I am continually amazed by their dedication to the mission and their world-class work ethic,” Kennish added.

The aviation resource management office here is a total force-integrated office where 131st members work side by side with their active-duty 509th teammates. The office is responsible for updating and tracking training, flight physicals, incentive pay, flight hours and many other flight management actions for all aircrew assigned to the installation.

“It really is a team effort,” said Rogers. “We work hand in hand with our active-duty counterparts and I couldn’t do this by myself. It really is a testament to how strong Team Whiteman is.”

Cooper said it was surreal to win a major command-level award and credited the high-visibility of the B-2 mission they support. She also reiterated that working with the Guard is a team effort.

“When I joined the Guard from day one, it felt like family,” Cooper said. “They rallied around me and it was what I wanted, to be part of a team, part of a family. Not only am I doing my job for the Air Force but I am part of a family and creating relationships.”

Though neither of them expected to win an award for the work they do, both Rogers and Cooper said it was a nice surprise to be recognized for a job well done.

“We both go into work focused on what we need to do and we get it done,” Cooper said. “We hold ourselves to high standards so we go above and beyond, not only in our primary duties but in our additional duties as well.”