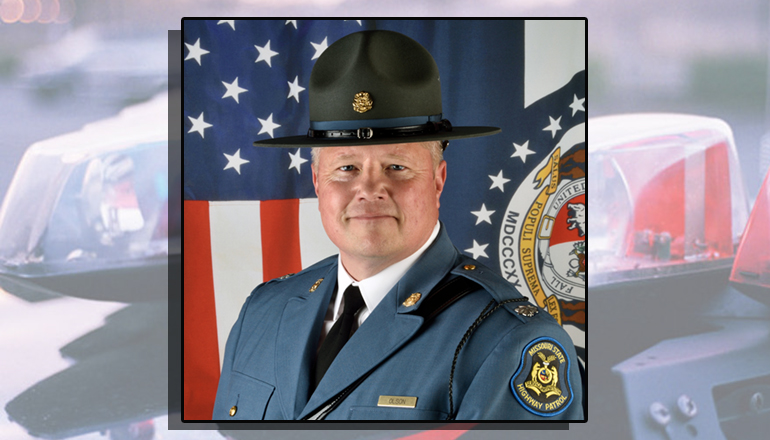 On March 5, 2019, Governor Michael L. Parson appointed Lt. Col. Eric T. Olson the 24th superintendent of the Missouri State Highway Patrol. He was confirmed by the Missouri Senate on March 14, and now holds the rank of colonel. Colonel Eric T. Olson was sworn in at 2 p.m., March 15, 2019. The Honorable Patricia Breckenridge, Supreme Court of Missouri, administered the Oath of Office.

“I am honored and humbled to become the 24th superintendent of the Missouri State Highway Patrol,” said Colonel Eric T. Olson.

Olson was appointed to the Patrol on July 1, 1990, as a member of the 63rd Recruit Class. Upon completing his training at the Patrol’s Law Enforcement Academy, he was assigned to Troop H, Zone 4, Mercer County. On August 1, 1995, he was promoted to corporal and designated assistant zone supervisor of Zone 1, Holt County. Olson was promoted to sergeant on October 1, 1997, and designated zone supervisor of Zone 3, Harrison County. He was promoted to lieutenant on July 25, 2004, and assigned to Troop B Headquarters in Macon, MO. On July 1, 2014, Olson was promoted to the rank of captain and designated commanding officer of Troop A, Lee’s Summit. On May 1, 2015, he transferred to the Division of Drug & Crime Control where he served as director. Olson was promoted to major on January 1, 2017, where he served as commander of the Criminal Investigation Bureau, General Headquarters, Jefferson City, MO. In that capacity, Olson had direct oversight responsibility for the Crime Laboratory Division, Division of Drug & Crime Control, Gaming Division, and Missouri Information Analysis Center. Olson was promoted to lieutenant colonel March 9, 2017, and designated assistant superintendent of the Patrol. In that capacity, he acted in the superintendent’s absence and at her request, and had direct oversight over all six bureau commanders, Professional Standards Division, Public Information & Education Division, and Office of Community Engagement & Outreach. On September 1, 2018, he assumed the role of acting superintendent.

Colonel Olson grew up in Chillicothe, Missouri. He graduated from Chillicothe High School in 1986. Olson earned a Bachelor of Arts in psychology from William Jewell College in Liberty, MO, in 1990. He completed the FBI National Academy in Quantico, VA, in June 2011. Colonel Olson and his wife, Ronda (Willis), have two sons, Lance and Garett.