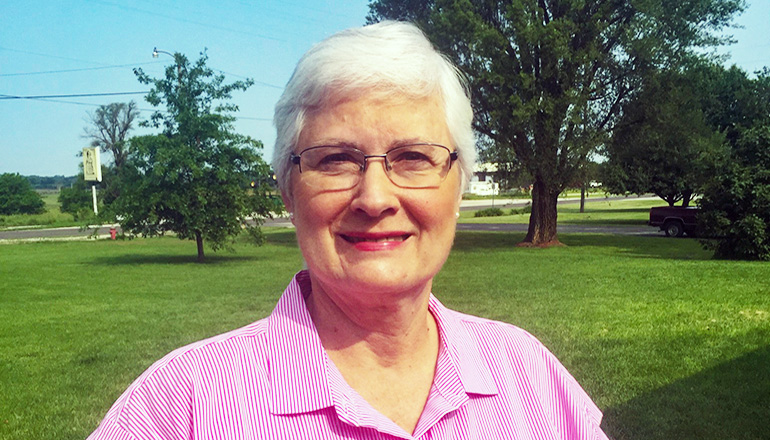 Making a selection as the 2019 Trenton High School Alumni Honoree was a difficult one for the Class of 1994 as many teachers and staff members were deserving and considered for the honor. To allow for each voice to be heard, class members were invited to vote for their choice and with a fantastic class response to the privilege, Barbara Spencer was chosen for the honor.

When asked of her reaction, Barbara says “it is a great honor to know the students I have had want me to represent them as the 2019 Alumni Honoree. When assessing an individual’s time on earth, a person spends very little time in the classroom, but the short time in a classroom can mean the difference between a positive or negative outlook on life. Hopefully, I have created a positive outlook for my former students.”

A graduate of Princeton High School, Barbara Higdon Spencer’s road to higher education continued to Trenton Junior College where she graduated with an AA degree. Next on to Northeast Missouri State University where she earned a BSE in English Education, a BS in Sociology, and certification in Speech and Theatre. And it didn’t stop there, Barbara went on to earn her Masters in English Education from Truman State as well as hold a Certification in Library Science.

This life-long learner began her own teaching career in the Jameson School District and later employed by the Trenton R-9 School System, a love for teaching that lasted for 29 years. Upon her retirement, she was asked to become the Librarian for the Laredo Elementary School District, a position she held for two years. Still not quite ready to retire, Barbara completed her classroom teaching assignments at North Central Missouri College and retired in 2017.

Barbara says she was most proud of Forensics, a program that she was initially hesitant about but privileged to see the successes generated. Superintendent Dr. Gary Howren approached Mrs. Spencer to pursue the Forensics program and after the initial competition she and her students attended, she still felt lost but along with her participants, they agreed to continue learning and the benefits soon paid off. By the end of the first year, students were excited as was Mrs. Spencer and the results were worthwhile. Barbara says that during the many years of competition in the National Forensics League, she was fortunate to have many students advance to State competitions and one to compete in the National tournament surviving in four of the six rounds of competition before being eliminated.

Barbara says Alternative English was perhaps her most enjoyable class. She was allowed to create the curriculum goals for students who might not remain in school after turning 16 or without plans for higher education. As a result, students were taught basic life skills with an English emphasis including reading and understanding bills, maintaining a budget and a bank account, employment readiness, job interviewing, locating county services where services are available if needed and finally, how to travel outside of Trenton. She says the out of area visits ended when a trip to Kansas City Airport on 9/11 occurred and all school visits to airports stopped.

You might know that a busy and dedicated individual like Barbara Spencer didn’t really retire. Since leaving the classroom, Barbara has worked for Preferred Family Health on a part-time basis in drug and alcohol rehabilitation. She was also employed by the Community Action Agency as a program recruiter and after four years, her first grandchild was born and she became a Grandmother and a happy babysitter of Owen and then Carly until they began attending school.

Other involvement for Barbara Spencer has included extensive dedication to the Church Women United Thrift Shop, the Green Hills Women’s Shelter, Friends of the Library, the Grundy County Museum, Dorcas Richardson Chapter Daughters of the American Revolution, “Hugs from Home” Military quilt project and the StoryLink program at the Chillicothe Correctional Center.

Amidst all this activity, Barbara and husband Steve have been married for 48 years and have one daughter, Trisha and son-in-law Scott Sharp and two grandchildren. In the 1980s, the Spencer’s were also parents of two foster children, Stormy and Jennifer. The couple enjoys atlatl throwing, archery shooting, hunting and fishing and spending quality time with their daughter and family.

Whether critiquing English papers, observing a competitive debate, cheering on her grandchildren in their activities or lending a helping hand to someone just needing a lift, Barbara Spencer has and will always be there to make a difference. It is obvious she made a difference in the lives of the Class of 1994 and so many others over the years. The Trenton High School Alumni Association is honored to recognize Barbara Spencer as the 2019 Alumni honoree.