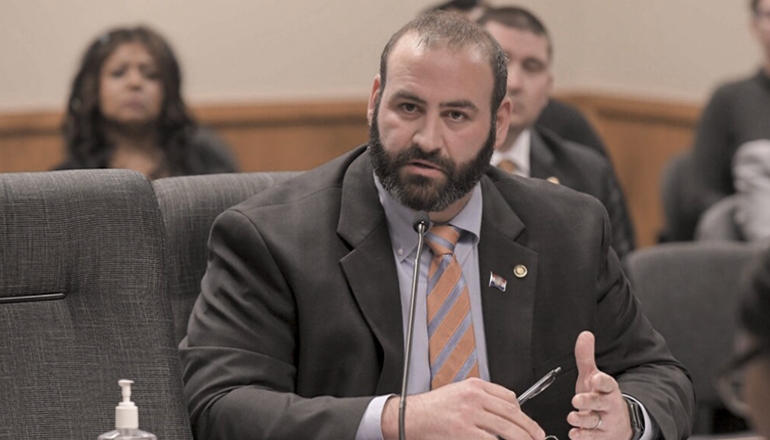 (Missouri Independent) – Some of Missouri’s animals’ last moments are spent in a gas chamber, suffocating in carbon dioxide – but a bill by Rep. Adam Schwadron, R-St. Charles would bar shelters from using this type of euthanasia.

“Humanely treating our animals in our shelters is something that’s very important for us in the state,” Schwadron said. “And realizing that we are one of three states that still allow this practice: it’s time to end that.”

His bill would also prohibit other methods the American Veterinary Medical Association deems less than humane – such as gunshots and or clubbing unwanted animals. Shelters would be limited to euthanasia via sodium pentobarbital or a substance that is “clinically proven to be as humane.”

The association’s guidelines for the euthanasia of animals explain that carbon dioxide and carbon monoxide, the two gases named in Schwadron’s bill, can cause animals to become agitated and try to escape.

The association notes that carbon monoxide is harmful to humans, so facilities should be maintained and monitored to keep staff safe.  Carbon dioxide, while less of a threat to humans, is linked to more pain and stress.

“It can take upwards of 30 minutes to kill an animal this way, and we’ve seen examples in some of these gas chambers where the animals just panicked and tried to claw their way out and ripped their claws out,” Schwadron said. “In the last moments of this animal’s life, it was scared, it was panicked, it was worried, and that’s not the way any animal should have to go.”

Cody Atkinson, who serves as Missouri’s state director for the Humane Society of the United States, said the Humane Society is watching three states with gas-chamber euthanasia in shelters: Wyoming, Utah, and Missouri. Utah is currently considering legislation similar to Schwadron’s bill.

There are two public shelters in Missouri with a gas chamber, Jefferson City and Poplar Bluff. According to Jefferson City Police public information officer Lt. David Williams, the city does not use gas to euthanize dogs or cats – the only species named in the legislation.

Jefferson City used its gas chamber 21 times last year, Williams said. He said the key benefit to using gas is that an animal control officer can use it, saving a veterinarian from potentially being harmed by a raccoon or other wild animal. The vet is also not available for as many hours during the week as the officers.

Poplar Bluff uses gas “very sparingly,” James Sisk, city planner, and the shelter’s supervisor said. “It’s only used in the case of an injured dog or a very sick dog that they can’t help.”

“A conversation has happened within the last few months of just removing it from the building altogether – that’s how sparingly it’s used anymore,” he said. “It’s been the better part of a decade since it was used on a regular basis.”

Poplar Bluff is one of five municipalities with a shelter that euthanizes companion animals, a fact the Humane Society of the United States tracks after hearing unsettling stories.

Atkinson recalled learning about a dog’s euthanasia in a gas chamber in 2017 in Moberly. It took 10 minutes of the dog gasping before the animal succumbed. Later that year, the animal shelter discarded its gas chamber with a $3,000 grant from the Humane Society of the United States.

The organization has been pleading with individual shelters to stop gas euthanasia but sees a more permanent solution in statewide legislation, Atkinson said.

“What we want is to not just discontinue their current use, but make sure that they don’t ever get fired up again,” he said.

Ohio’s governor signed a gas ban earlier this month, and Atkinson has hopes Missouri can do the same.

“I do think that Missourians love animals and want them to be treated with dignity and respect,” he said.

Schwadron said has been talking with colleagues and hopes to bring other lawmakers on as cosponsors.

Neither Atkinson nor Schwadron anticipates much opposition to the bill, including from the farm industry.

In 2010, when voters passed a ballot proposition to limit dog breeders’ number of breeding dogs to 50, the Missouri Farm Bureau was in fervent opposition. The legislature replaced the proposition with new, less restrictive legislation in 2011.

Schwadron said he is not looking at expanding his legislation to impact livestock, so he doesn’t anticipate pushback from farmers. He is focused on dogs and cats in shelters.

“Cats and dogs in our animal shelters, they’ve got a specific mission,” he said. “And these are mostly companion animals and not livestock. So, keeping those two separate for me right now is important.”

Annelise Hanshaw covers education — a beat she has held on both the East and West Coast prior to joining the Missouri Independent staff. A born-and-raised Missourian, she is proud to be back in her home state.