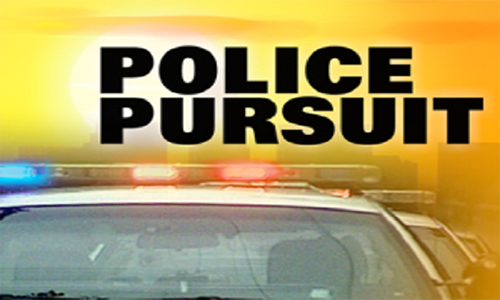 The Chillicothe Police Department reports a driver was able to elude officers Wednesday night during a pursuit that allegedly involved excessive speed.

At 9:20, police observed a vehicle traveling south in the 10 block of South Washington Street. The driver refused to stop, and the vehicle traveled to the Highways 65 and 36 intersection, where it proceeded east on 36 to Lowe’s Acres and north to Ryan Lane before abandoning the vehicle near a residence.

Assistant Police Chief Rick Sampsel said officers could not locate the driver, and the vehicle was towed from the scene. The Chillicothe Police and Livingston County Sheriff’s Department are continuing their investigation.

Among other Chillicothe Police activity reports, a motor vehicle stop was made Wednesday night in the 1200 block of North Washington Street and discovered a female driver was wanted on felony warrants from the state of Kansas. The warrants involved drug and paraphernalia charges.

The woman was medically cleared for confinement and taken to the Daviess-DeKalb County Regional Jail to await extradition by officials in Kansas. Her vehicle was towed from the scene of the stop. Authorities did not release her name.