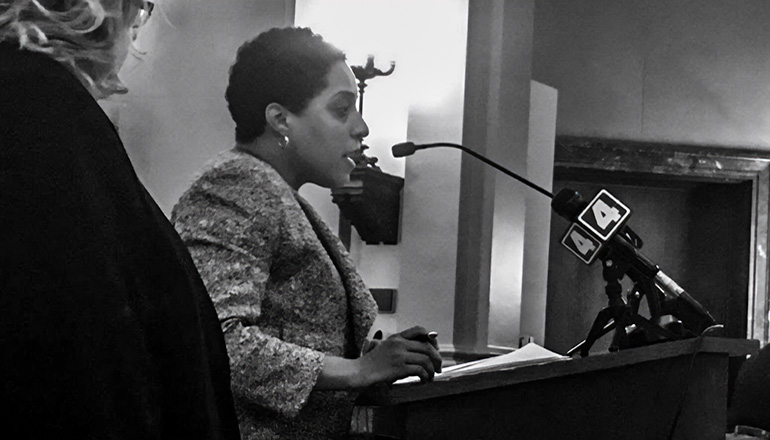 (Missouri Independent) – A circuit judge will determine whether St. Louis Circuit Attorney Kim Gardner is entitled to claim privilege for her communications with political donors and key figures in the 2018 investigation of former Gov. Eric Greitens, the Eastern District Missouri Court of Appeals ruled Tuesday.

The court affirmed a 2020 decision by St. Louis Circuit Judge Christopher McGraugh that found Gardner’s office purposely violated the Missouri Sunshine Law by refusing to turn over documents to John Solomon, a Washington, D.C. reporter who is a Fox News contributor and former staff member of The Hill.

Under the ruling, Gardner’s office must provide Solomon with a list of the documents potentially subject to disclosure and provide the documents themselves to McGraugh to determine what is and is not a public record.

While Greitens resigned in 2018 as the Missouri House moved toward his impeachment, he is attempting a political comeback this year as a candidate for the U.S. Senate. Polls have consistently shown him to be among the frontrunners in the Republican primary set for August.

A large portion of the opinion discusses Gardner’s argument that McGraugh’s decision should be set aside because he didn’t allow a response to be filed late to the allegations in Solomon’s lawsuit. Assistant Circuit Attorney Lopa Blumenthal, who handled the case, argued at various times that the filings were late because of a clerical error, that there was confusion at the start of the COVID-19 pandemic, and that she didn’t file it because she wanted to add material, Clayton noted.

Instead, Clayton wrote, it was reasonable for McGraugh to decide the failure “to file a timely responsive pleading to the amended petition was not an act of negligence but instead was a deliberate, conscious, and reckless choice to risk the possibility of a default judgment.”

Gardner’s office did not respond immediately to a request for comment on the ruling. Solomon’s attorney, David Roland, director of litigation at the libertarian Freedom Center of Missouri, did not respond to a message-seeking comment.

When Greitens resigned from office in June 2018 he faced felony charges stemming from allegations that he threatened to release a nude photograph of the woman — taken while she was blindfolded and her hands were bound — if she ever spoke publicly about the emotionally and physically abusive relationship.

In his 2019 request, Solomon asked Gardner for all her communications with the woman, her former husband, the ex-husband’s attorney, Al Watkins, and Missouri Times publisher Scott Faughn, who made $100,000 in cash payments to Watkins in the days leading up to the story about the alleged blackmail breaking on St. Louis television station KMOV.

During the investigation, Greitens and his attorneys alleged that Faughn’s payments originated from figures in the low-income house tax credit industry, noting that one of the sponsors of his weekly television talk show is Sterling Bank, which specializes in financing projects involving low-income housing tax credits.