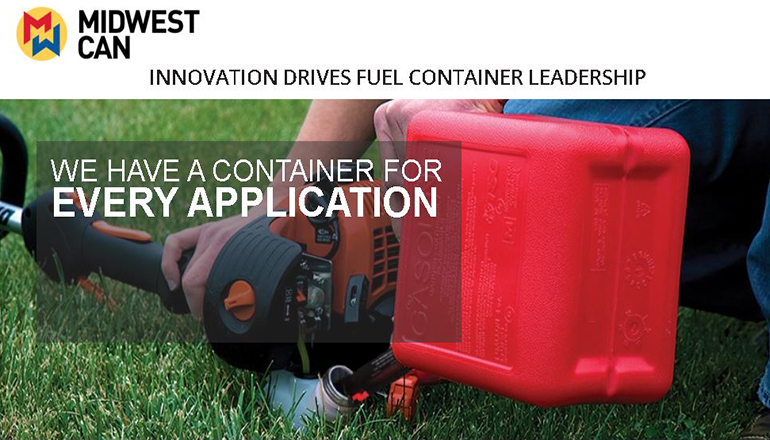 The U.S. Environmental Protection Agency (EPA) and the U.S. Department of Justice announced a settlement that will require Midwest Can Company, one of the largest manufacturers of portable fuel containers in the United States, to pay a $1.7 million civil penalty to resolve Clean Air Act violations.

The violations resulted from failure to disclose test results showing that Midwest’s portable fuel containers did not meet regulatory standards and emitted higher amounts of pollutants than allowed by federal law. Under the terms of the settlement, Midwest will also conduct two supplemental emission tests in the next four years on its currently certified co-extruded plastic portable fuel containers and submit complete results from those tests to the EPA.

“The settlement with Midwest Can Company marks the Justice Department’s first enforcement action against portable fuel container manufacturers under the Clean Air Act,” said Jonathan D. Brightbill, Acting Assistant Attorney General of the Justice Department’s Environment and Natural Resources Division. “This settlement helps maintain the integrity of regulations governing portable fuel containers and ensures that manufacturers who are responsible for complying with the rules do not gain an unfair competitive advantage from subverting regulatory requirements.”

“The defendant submitted false and incomplete information to the EPA and prevented EPA from timely implementing and enforcing regulations intended to protect public health and our air,” said Susan Bodine, EPA’s Office of Enforcement and Compliance Assurance Assistant Administrator. “EPA will continue to enforce against companies that fail to comply with information submission obligations.”

“We are pleased to announce this settlement with Midwest Can Company, one of the largest manufacturers of portable fuel containers in the United States,” said John Lausch Jr., U.S. Attorney for the Northern District of Illinois. “In paying a significant penalty and agreeing to perform supplemental testing, Midwest Can Company will be held accountable for its disregard of proper testing and reporting procedures in violation of the Clean Air Act.”

Clean Air Act regulations require that all portable fuel containers sold in the United States must be covered by a certificate of conformity issued by EPA confirming that the containers meet emission limits for volatile organic compounds (VOCs). The complaint filed simultaneously with the settlement alleges that Midwest violated the Clean Air Act because its 2014  applications for certificates of conformity failed to disclose test results showing that the portable fuel containers did not meet regulatory standards and emitted higher amounts of VOCs than allowed by federal law.

EPA discovered the violations following a series of investigative actions from 2016-2018. In 2016, EPA conducted emission testing on five of Midwest’s portable fuel containers sold under the 2014 certificates of conformity. All five containers failed the emission test. EPA proceeded in 2017 to inspect the test lab utilized by Midwest to conduct emission testing of its portable fuel containers. In 2018, EPA received and reviewed additional information from the test lab, which revealed the violations related to Midwest’s applications for certificates of conformity.

VOCs include a variety of chemicals that may produce adverse health effects such as eye, nose, and throat irritation, headaches, nausea, and damage to the liver, kidney, and central nervous system. VOCs also contribute to the formation of ground-level ozone. Breathing ozone can trigger a variety of health problems, particularly for children, the elderly, and anyone with lung diseases such as asthma. Ground-level ozone can also have harmful effects on sensitive vegetation and ecosystems.