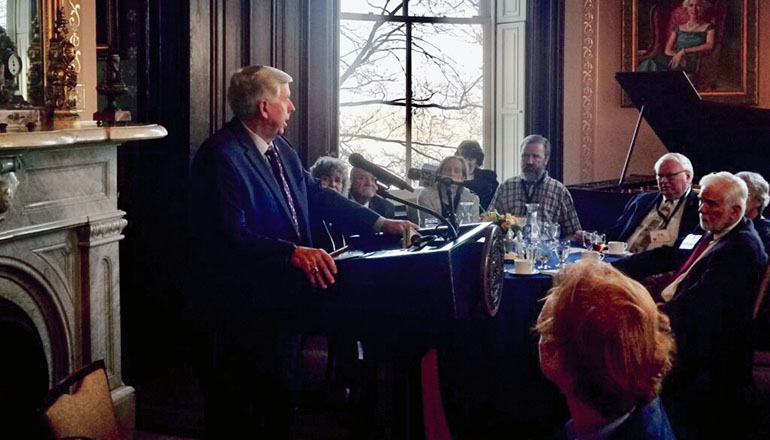 (Missouri Independent) – Gov. Mike Parson on Thursday once again refused to accept the conclusions of an investigation by the highway patrol and Cole County prosecutor surrounding a reporter who uncovered a security flaw in a state website.

Speaking to a gathering of reporters and editors in the governor’s mansion for Missouri Press Association Day, Parson restated his accusation that a reporter from the St. Louis Post-Dispatch stole the personal information of teachers.

In fact, as documented in a 158-page investigative report compiled by the Missouri State Highway Patrol and Cole County Prosecutor Locke Thompson, the reporter simply looked at the source coding of a publicly available state website — something that is typically available to anyone using a web browser.

That wasn’t the conclusion of either law enforcement or the prosecutor, who declined to press charges.

Thompson told The Independent that if any crime was committed it was both unintentional and based on a law so broad and vague it essentially criminalizes “using a computer to look up someone’s information.”

“Our investigation did not uncover any evidence that any of the (Social Security) numbers had been compromised,” Thompson said.

Once the reporter confirmed the Social Security numbers of hundreds of thousands of teachers were at risk of public disclosure, he notified the state, explained how he found the flaw and promised not to publish anything until the issue was fixed.

State officials wanted to thank him. But the governor instead convened a press conference to call the reporter a hacker and push for a criminal investigation.

Even after the prosecutor’s public statements explaining why charges wouldn’t be filed, Parson has refused to back down from his claims.

His reiteration of his allegations against the reporter Thursday came moments after greeting members of the media from around the state at the mansion with an exhortation of his commitment to transparency and press freedom.

He said that since he took over as governor from his scandal-plagued and media-averse predecessor, Eric Greitens, he’s worked to “change the way the governor’s office reacted to the media.

“I think it’s very important for people in elected positions or true public servants to be transparent,” he said. “I really do.”

Yet Parson’s relationship with the press has been much more complicated. The governor regularly lashes out at perceived slights and criticism, culminating with his push for criminal prosecution of the Post-Dispatch reporter who he accused of trying to use the security flaw to embarrass his administration.

In January, records obtained by The Independent showed that among the governor’s legislative priorities are changes to the state’s Sunshine Law that would permit government agencies to withhold more information from the public and charge more for any records that are turned over.

The governor has not endorsed anyone in the race, and on Thursday declined to say whether he would be willing to support Greitens if he were to be the party’s nominee.

Greitens resigned from office in 2018 while facing impeachment and felony charges. Many Republicans worry he could cost the party the Senate seat if he were to emerge from the primary victorious.

While Parson acknowledged he “didn’t like the things that occurred when he was governor,” he declined to weigh into the race either in support or opposition of any candidate on Thursday.

“I think there are a lot of really good candidates,” Parson said, later adding that his position on whether to endorse “may change.”