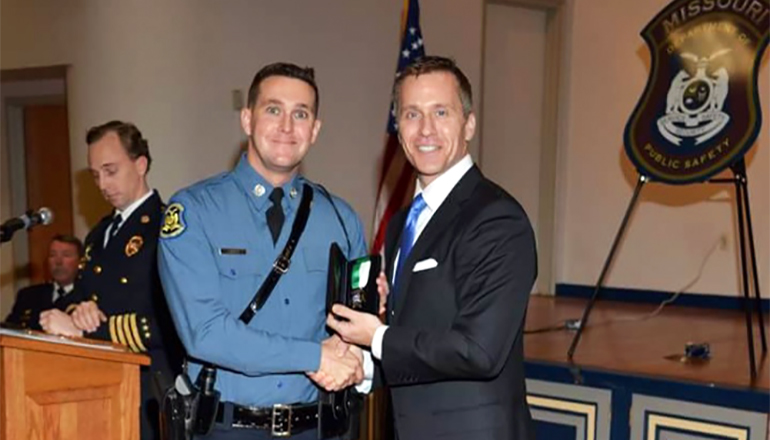 “I was surprised when I found out that my team was receiving the awards for our actions,” said Kings. “You don’t expect to be awarded for doing your job. I felt thankful and it felt good knowing that I was accompanied by many individuals who were deserving of these awards.”

On October. 1, 2016, Kings and two officers from his unit responded to a call from an apartment complex in Farber, Missouri. The resident reported a problem next door. Seeing two women inside and sensing trouble, they asked to enter the apartment.

“There is a lot of information and detail that went into our assessment of the situation,” said Kings. “We weren’t sure what was going on, but we knew something wasn’t right. We simply wanted to do our job and ensure people were safe. Often, calls we go on are not nearly as bad as they sound over the radio when we are dispatched. It’s our job to find out the truth.”

Upon entering they were confronted by a man holding a shotgun.  Officers ordered him to drop the gun but the gunman started to fire at them. Two of the officers returned fire as the third officer requested assistance.

“We saw each other at the same time. Once I saw him and realized what was going on, I just did what I was trained to do,” said Kings. “It was obvious very quickly he was there to fight and the main priority in the situation is to protect myself, my fellow officers, and anyone who is in danger.”

After the shooting, first aid was provided to those who were injured. The gunman was then identified as a convicted murderer who was recently released from prison. His injuries were treated and he is under arrest currently waiting to stand trial.

By demonstrating outstanding bravery and putting his life on the line for the safety of the public, Kings was able to capture a convicted murder and make the town a safer place.

“It felt good knowing we took a really bad person into custody,” said Kings. “It’s why many police officers do their job, to help good people, and take bad people to jail.”

Governor Greitens also announced that October. 28th of each year will be known as Missouri Public Safety Officers Recognition Day.

“It’s an outstanding way for the Department of Public Safety to recognize the police officers, firefighters, and civilians for their outstanding bravery they demonstrate every day,” said Kings.