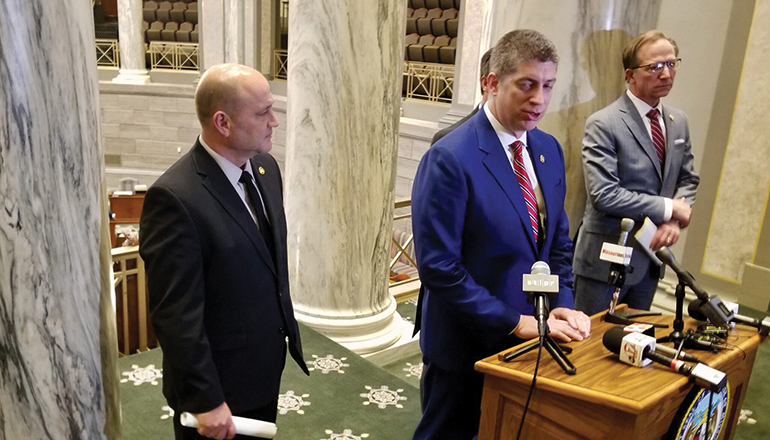 (Missouri Independent) – In chess, a defensive move that swaps positions of the rook and the king is called castling. The move that ends the game, of course, is the checkmate.

Early Thursday morning, the Missouri Senate leadership castled the congressional redistricting bill by recessing, instead of adjourning, the Wednesday session. That meant that when members returned around noon, there would be none of the routine business like approving a daily journal that could be filibustered.

The checkmate came early Thursday evening when the discharge petition with 12 signatures of Republican legislators brought the House-passed redistricting bill to the floor for immediate debate.

Members of the conservative caucus leaped to their feet. They had opposed all previous versions of the map that were supported by Senate Republican leaders. Sen. Bob Onder, R-Lake St. Louis, tried to argue that the Senate rules required any bill brought to the body from a committee to wait a day for debate.

“They didn’t think there was any way for that map to come out of committee and not lay on the calendar for a day,” Senate President Pro Tem Dave Schatz said in an interview Friday.

The final option, a motion called the previous question that cuts off debate, wasn’t needed.

“We were prepared to do whatever we needed to do because we thought it was that important,” said. Senate Majority Leader Caleb Rowden. “But I’m glad that we were able to move through the process in a different way to get things done.”

And with the 22-11 vote, steamrolling over the conservative caucus to get the map finished, the session, at least for the Senate, was over.

“There’s a reason, I think, that there are so many primary challenges to sitting Republican incumbent senators, and if we don’t get back to Republican values, I think that’s just going to continue to increase in the future,” said Sen. Bill Eigel, R-Weldon Springs at the post-session news conference by the conservative caucus.

“These are the votes that are going to haunt politicians in this building for at least a few months to come and maybe a lot longer,” Eigel added a few minutes later.

The daily journal is the official record of the proceedings in each chamber of the General Assembly. And for the first time since a fixed adjournment date was set in 1952, the Senate journals for the past two years will not have an entry for the final day.

Last year, the Senate worked on Friday but the day’s action was, by the journal, a continuation of the Thursday session. This year, the last journal will be marked with the date for Wednesday.

That doesn’t mean the final day has always been productive. In 2015, Senate Republicans determined to pass a right-to-work law used the previous question motion to pass it on Tuesday of the final week.

After the vote, only one bill was passed over the final three days.

Coming back just so the Senate could say it worked up to the constitutional deadline made no sense, Senate Minority Leader John Rizzo, D-Independence, said at a post-session news conference.

The split in the GOP ranks became apparent during the 2021 session and has only grown worse. After a bitter floor fight during September’s veto session, Rowden said the conservative caucus had turned the chamber into a “clown show.”

And in the run-up to this year’s session, the majority faction of the Republicans, rather than seeking to mend fences, met in December without inviting members of the conservative caucus. Senate Appropriations Committee Chairman Dan Hegeman, R-Cosby, said the meeting was for “some folks who would like to see the session be productive.”

That sowed the seeds.

The harvest came when the congressional redistricting plan hit the floor. There were entire weeks when few committee meetings were held and no substantial business was conducted while members were in session for hours because members of the conservative caucus filibustered approval of the journal for the previous day.

“It’s no secret that this place was ugly at times and was difficult to watch,” Rowden said Thursday. “Sometimes there were days where I frankly went home embarrassed and you know, partly because for better or worse, I knew I was part of the problem.”

After weeks of hearing they were helping Nancy Pelosi remain speaker of the U.S. House and betraying bedrock Republican principles, the majority faction began hitting back. And the most personal battles were between conservative caucus members and state Sen. Holly Thompson Rehder, R-Sikeston.

In early March, Rehder drew 13 Republicans and nine Democrats together to demand that the conservative caucus treat other senators with respect.

“​​It’s time for us to end the empty negotiations and begging for civility with these guys behind closed doors,” she said.

In the last week, Rehder’s bills became a target. She was able to get a revised Sexual Assault Survivors Bill of Rights passed, but twice during Wednesday’s session was blocked from a vote on a bill to allow addicts to obtain clean needles to prevent bloodborne diseases.

After Onder – who won’t be representing the 2nd Senatorial district next year due to term limits – finished speaking on the congressional map Thursday, Rehder was pointed in her goodbye.

“I pray that is the last pontificating we will hear from the Senator from the second,” Rehder said.

But that orderly succession is dependent on the conservative caucus remaining a minority faction in the upper chamber. Eigel said he is looking forward to elections that will replace at least six Republicans.

“Voters are going to decide on probably six or seven new Republican senators,” Eigel said. “Here in the Missouri Senate, we’re going to add those new personalities to the mix so, I know that’ll be exciting as well.”

The conservative caucus agreed that there was no point in remaining in session for the final day because little would be accomplished.

And that was evident Wednesday when the Senate locked up on almost every bill brought up. The conservative caucus complained its priorities and feelings had been trampled on. The majority of the GOP caucus, in turn, accused the faction of disrupting so many workdays that they killed their own priorities.

And a departing senator warned that he has little hope future sessions can heal the division. Factional fights and “gotchaism” are all the newest members have seen since their arrival, said Sen. Paul Wieland, R-Imperial.

“We’re going to have generational issues here in the Senate,” Wieland said, “because as these people become the senior members, this is what they are used to and they are going to transpose it onto the next generation.”