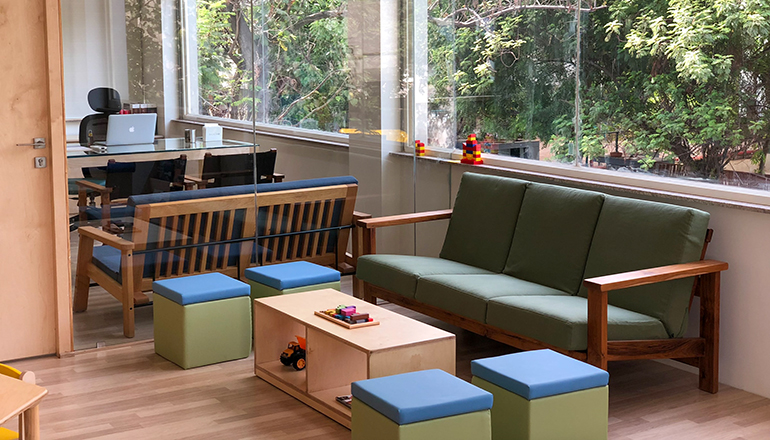 Only about a dozen children have been attending regularly amid the pandemic. Under normal circumstances, she used to serve as many as 100.

She’s already had to reduce the hours that Good Shepherd Preschool and Infant/Toddler Center in St. Louis can be open, and with that has come a shift to paying her workers only part-time. Trying to keep class sizes small to limit the chance of the virus’s spread has been a priority, but it also means needing more staff to oversee more classrooms along with the cost of protective equipment to keep both teachers and children safe.

Collins did the math, and based on her current budget and the number of children she’s serving, she has just enough to cover operating expenses in January — and that would be without paying herself or her staff.

“That means I would have to lay off every single one of my teachers, my cook. And the director and I would both have to work 10 hours a day with no salary,” Collins said. “So basically, we won’t be able to survive.”

Closure is a fear that sits on the horizon for many childcare providers across Missouri. Some have seen a reduction in funds and are waiting on tens of thousands of dollars in reimbursements from the state for serving low-income and foster families.

Providers and childcare advocates say there’s more money on the table that the state should make available — otherwise, they say centers are in danger of closing permanently, leading to less care for children and fewer options for parents seeking to return to the workforce.

“Without childcare,” Collins said, “there is no rebuilding the economy.”

In an August 2020 report, Child Care Aware of Missouri, a nonprofit that works to improve child care services, found that the number of open childcare programs in the state went from 3,301 in February to 2,223 by late July.

Robin Phillips, the CEO of Child Care Aware of Missouri, said that in recent months with schools reopening their doors, about 80 percent of childcare programs are now reopened. But of those that are, many aren’t operating at full capacity, in part, due to families not returning and restrictions on classroom sizes.

“We run into other issues that these businesses are facing, and that is the significant increased cost for additional staff to make sure they’re meeting ratios and cleaning requirements,” Phillips said. “And many of those staff are hard to find right now.”

While the state has made allowances to ease the burden of the pandemic, like special one-time payments to providers and temporary benefits for families searching for work, recent decisions from the state are putting even more pressure on centers who serve low-income and foster families, providers said.

The state received $66.5 million in Child Care and Development Block Grant funding from the CARES Act to support its response to the pandemic, which must be spent by Sept. 30, 2021, said Mary Compton, a spokeswoman for the Treasurer’s Office.

Starting in April, the department began using a portion of those block grant funds to pay providers who accept subsidies based on “authorization,” essentially paying them for the full amount of children covered by the subsidy program — regardless of attendance.

In late August, Gov. Mike Parson wrote in a Facebook post that the waiver would continue throughout the month.

But that’s not what happened. And DSS spokeswoman Rebecca Woelfel wrote in an email Thursday it was not intended to.

The department “communicated in May the intent was to pay based on authorizations for service months April, May, and June,” she wrote. “DSS extended that temporary payment option to July service dates. It was never the intent to pay on authorization long term.”

Providers were informed in September that for the month of August and going forward, they would return to being paid subsidy payments based on a child’s attendance — at a time when many providers were serving fewer kids due to the pandemic.

“Everyone freaked out because we had budgeted for the month of August based on authorization, only to find out that we would only be paid based on attendance,” said Nicci Rexroat, the owner of A Place to Grow in Holts Summit.

“The subsidy thing has been a nightmare this year in all honesty,” she said.

Anderson’s agency has seen a $500,000 decline in revenue, and a federal Paycheck Protection Program loan was barely enough to cover its losses, Anderson said. What was once a lengthy waitlist now takes three to four calls to find a family who will fill an open slot.

“With there not being real light at the end of the tunnel, it is real tenuous,” Anderson said, later adding, “We’re not asking to be bailed out. We just want to be available on the other side of this for families.”

Childcare providers have had to make difficult choices, trying to budget for the future while weighing what services can be scaled back in order to stay afloat now.

Casey Hanson, the director of outreach and engagement at Kids Win Missouri, a coalition of organizations that advocate for child well-being, suggested DSS should reinstate payment based on authorization through at least the end of the year, and then evaluate on a quarterly basis.

It’s a call providers echoed as their number one request.

“I think they’re listening,” Anderson said. “But I don’t think we’ve seen it result in action.”

On top of calls to return to payments based on authorization, some providers said they are still waiting on the state to reimburse them for thousands of dollars in care.

Each month, parents must approve all of their pending transactions for care in KinderConnect, the portal parents and providers use to track attendance, and more. If a parent fails to do so, then providers won’t get paid and have to file a “payment resolution request” in order to receive payment for the services already delivered.

Woelfel said a payment resolution can occur due to a number of errors in the system, such as a dispute over the payment amount or if a parent fails to sign a child in or out.

“And there’s a huge backlog in processing payment resolution requests. And so that further delays our ability to be able to pay our bills,” Collins said, who serves almost entirely children in the subsidy program. “And so if the state of Missouri funding is delayed or reduced, that has a huge impact on my operation.”

Collins is still waiting on payment resolution requests from May and June. In the last month, some of Rexroat’s payments have trickled in, but she said she still has unfulfilled requests from as far back as February that amount to close to $30,000.

A Small Business Administration loan helped cover the mortgage on one of Rexroat’s buildings for a few months. But she’s had to wait to pay payroll taxes because of the lack of funds.

Woelfel said requests “drastically increased” when the new system went into effect, which is a little over a year old and not fully implemented.

The delays are also in part to the agency paying all payment requests at once, rather than a month at a time, for example. With providers submitting payment resolution requests past the 60-day timeframe, staff must do some calculations manually, which also results in delays.

The child care program recently received new leadership and underwent staff changes, and all payment exceptions submitted through September “will be worked by the end of this week” Woelfel wrote.

Hanson said she worries that in the face of financial difficulties and delays in payments, some providers will stop accepting children in the subsidy program and instead prioritize private pay families.

“Prior to the pandemic there’s been slowly a decline in the number of facilities even accepting childcare subsidies,” Hanson said. “And then we’ve just seen that trend continue.”

Subsidy payments have already dropped. When comparing DSS’s monthly management reports from August to September — the time span when payments were changed from authorization to attendance —  6,342 fewer children received the child care subsidy and roughly $5.96 million less was paid in child care payments.

Woelfel said the change in the number of children receiving subsidy payments, “is mostly attributed to resuming payment for attendance.”

It’s a consideration Rexroat said providers have to make. For example, for foster care children, the subsidy program pays roughly 75% of their weekly tuition — and nothing more.

“We don’t collect anything on top of that. And the problem with that is, our rates continue to rise as the minimum wage goes up,” Rexroat said. “Most of us — those of us who own childcare facilities — are not in it for the money. We’re in it for the kids. And so that is a really difficult spot to be in because we can’t continue to run a business if we don’t have the money to do it.”

If parents can’t find facilities that accept the subsidy option, that will be a barrier that keeps them out of the workforce, Hanson said. And if Missouri’s childcare infrastructure crumbles, advocates warn it could affect all families.

“It could be a driver of costs for everybody that participates in the system,” Hanson said. “Any hit to the supply is a hit to all parents that are relying on childcare.”

Providers said in their years of operating, they have never seen something cut the industry so deeply as the pandemic has. And ultimately, children and families will bear the brunt of it for years to come, Collins said.

“You’re going to see the ripple effect of this 20 years down the line,” Collins said, “because when you remove quality early childhood education from children — especially children who live in poverty — then you are going to have longer negative effects on your community for years to come.”

Photo by Gautam Arora on Unsplash