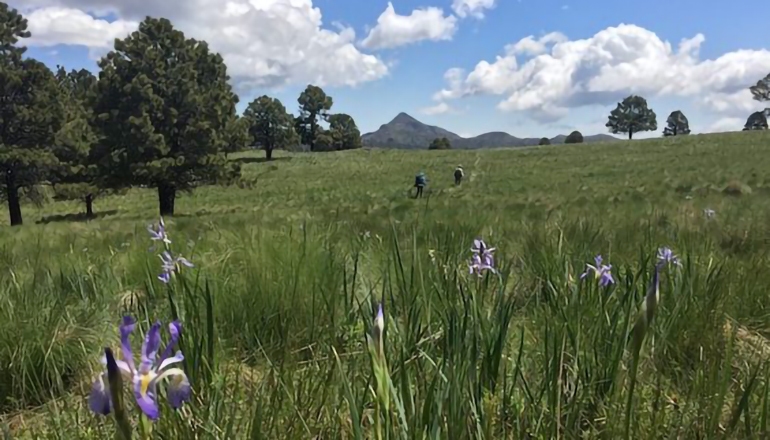 The 30×30 initiative, also called the “America the Beautiful” campaign, aims to preserve 30% of the nation’s lands and water by 2030.

But its pledge to fight the climate crisis could face hurdles. Announced by the Biden administration earlier this year, the initiative acknowledged what’s called a tipping point in damage done to the natural world and decisive action needed to reverse that damage.

It could be a heavy lift in New Mexico, where oil and gas funds from extraction made up more than a third of the state’s general fund in 2020.

Kim Pope, the Southwest region campaign representative for the Sierra Club, said nonetheless, New Mexico may have the most to gain from the 30×30 goal. “Nearly 760,000 acres of natural lands were lost to development in New Mexico between 2001 and 2017,” Pope reported.

The Environmental Protection Agency estimates fossil-fuel extraction on public lands contributes to at least 23% of greenhouse-gas emissions in the U.S.

Critics say the Biden proposal lacks a baseline of how much land and water is already under conservation or specific details on how it will conduct its tally over the next decade.

In a presentation to the Sierra Club Rio Grande chapter this week, Pope argued it’s critical to focus on the acreage aspect, but also get people involved who want to solve the climate crisis, preserve existing wild space and protect more nature. “We want to work with communities and make sure that the conservation efforts make sense for the community, that are equitable for all communities that lack green space or lack outdoor space,” Pope explained.

Pope said 12% of the country’s lands are currently protected. In New Mexico, where 47% of the state is designated public land, only 6% are protected through state and federal designation and conservation easements. So far, 50 countries and 70 U.S. mayors have committed to the 30×30 goal.