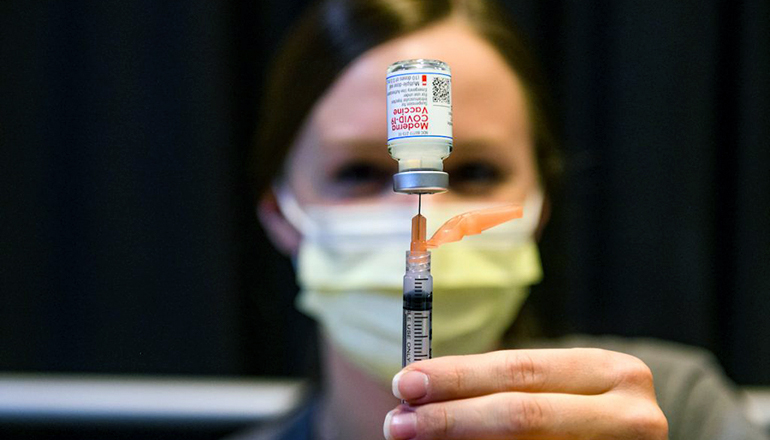 (Missouri Independent) – Booster shots soon will begin rolling out to some Americans who received the two-shot vaccine made by Pfizer—after a contentious and confusing federal approval process that isn’t over yet.

Determining who exactly should be rolling up their sleeves for an additional dose was tricky. The Biden administration had leapfrogged federal regulatory panels in announcing plans for a more sweeping booster campaign that it hoped would have begun last Monday.

Instead, only those who received the Pfizer shots will be eligible for boosters, and boosters will be limited to those 65 and older or individuals with underlying medical conditions, a Centers for Disease Control and Prevention panel recommended Thursday.

The initial eligible groups will also include health care workers, teachers, and others at higher risk of exposure to the virus at their workplace — a category that the CDC panel declined to recommend, but the top CDC official added them back in the agency’s official guidance late Thursday night.

The federal booster effort ran into challenges in the month since President Joe Biden made his announcement, including the time it takes to gather data on booster shots.

Pfizer was the first to submit its data to federal regulators and is the only one of the three vaccines so far to be formally considered for booster use.

Given a lack of data on the safety of mixing vaccines from different manufacturers, Americans who received the Moderna and Johnson & Johnson shots must wait to have their own boosters approved.

As federal health officials have scrambled to assess data on booster shots, the U.S. has been facing a fourth wave of cases, with an average of 130,000 infections and more than 2,000 deaths per day.

The overwhelming majority of current COVID-19 cases, hospitalizations, and deaths are among people who have not received a vaccine against the disease. Some members of the CDC advisory panel expressed uncertainty over the potential for boosters to tamp down the spike in infections.

“We may move the needle a little bit” by recommending booster doses, “but that’s not really the answer to this pandemic,” said Dr. Helen Keipp Talbot, associate professor of medicine at Vanderbilt University, emphasizing the need to vaccinate those who still haven’t received their initial shots.

Here are some questions and answers about boosters:

Who can get a vaccine booster?

Pfizer booster shots will initially be recommended to those 65 and older or in long-term care facilities, as well as those between 50 and 64 who have underlying medical conditions.

The CDC panel also voted to allow those between 18 and 49 years old with underlying medical conditions to obtain booster shots, based on an individual assessment of their risk from COVID-19.

The panel rejected a broader recommendation of a booster for anyone 18-64 who is in an occupational or institutional setting where the risk of COVID-19 transmission is high, such as health care workers.  Several experts on the panel expressed concerns about the category being too broad and including some who may not receive many benefits from a booster shot.

But Dr. Rochelle Walensky, head of the CDC, included it in her guidance, as did the Food and Drug Administration when that agency granted its signoff on Wednesday.

Roughly 26 million Americans are at least six months past their second Pfizer dose, and about half of those individuals are 65 or older, according to the CDC.

What if I’m not in one of the approved categories?

You should wait to seek out a booster shot.

Data presented during the FDA and CDC hearings shows that while the vaccines’ effectiveness has waned when it comes to being vulnerable to infections, breakthrough infections still tend to be mild and the shots’ protection against severe illness and hospitalization remains strong.

“If you’re not in a group for whom boosters are universally recommended, it’s really because we think you’re well-protected,” said Dr. Matthew Daley, a senior investigator with Kaiser Permanente Colorado’s Institute for Health Research.

What if I received a shot made by Moderna or Johnson & Johnson?

For now, you’ll have to wait.

Moderna has submitted its federal application for a booster shot, and Johnson & Johnson said this week that it has provided data to the FDA on its booster study.

A number of health experts at Thursday’s CDC advisory panel meeting expressed frustration about the lack of safety data on whether the shots can be mixed across manufacturers. FDA officials said they are working with those drug companies and the National Institutes of Health to gather the information needed for a science-backed ruling.

What if I want to get one anyway?

The recommendations do not include any requirements that health care providers confirm that those seeking a booster vaccine are in the eligible categories (which also include people who are immunocompromised, who were approved last month for boosters).

But the federal regulations on using those boosters under emergency approval mean that providers are supposed to strictly follow requirements on how the vaccines can be used.

When and where can I get a booster dose?

For the eligible groups, booster shots are recommended at least six months after receiving the second dose of Pfizer’s vaccine.

Most individuals can head to their local pharmacy: More than 70% of COVID-19 vaccines currently are being administered through pharmacies, according to the CDC.

Will this change what it means to be fully vaccinated?

Not yet. Regulators said Thursday that the definition of being “fully vaccinated” — which is used by workplaces, entertainment venues, and a range of other public and private settings — will still be the two doses of the Pfizer or Moderna vaccine (and one of the single-dose J&J shot).

Will the booster recommendation be expanded to more Americans?

These won’t be the last COVID-19 vaccination recommendations from federal health officials.

Throughout Thursday’s meeting, CDC doctors emphasized that the recommendations are on an interim basis, and will be re-evaluated and updated.