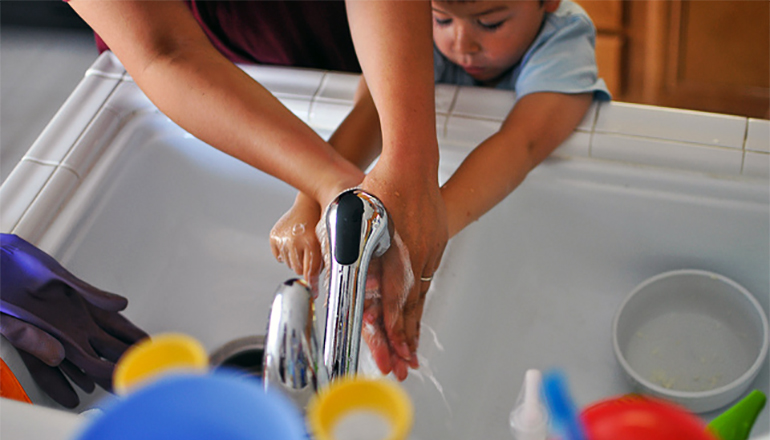 Here’s a tip for a safer July 4th picnic or barbecue, a new report says the act of simply washing your hands may not be enough to avoid the spread of bacteria and illness.

The U.S. Department of Agriculture research found that 97 percent of people are failing at basic hand washing. For instance, most neglect to wash their hands for at least 20 seconds, then rinse them for the same amount of time.

And Luis Delgadillo with the USDA said drying your hands, versus just shaking them off, is a step that shouldn’t be ignored.

“The reason why that’s a step that you don’t want to miss is because, when you’re actually drying your hands, you’re physically removing any potentially remaining bacteria off of your hands,” Delgadillo explained. “And so, that’s actually measurable; that drying motion actually also removes bacteria.”

Hand-washing is just one part of safe food preparation. According to the Centers for Disease Control and Prevention, 48 million Americans get food-borne illnesses each year. About 128,000 end up hospitalized, and for 3,000 people a year, food poisoning is fatal.   In the USDA study, almost half of participants contaminated spice containers while preparing burgers, and one-in-ten spread bacteria to refrigerator handles. Delgadillo said with summer picnic season underway, it’s a good time to prioritize food safety.

“Especially around holidays, we’re gathering with friends and family, usually we know one person or a couple of people who might have an illness that puts them at a greater risk for food poisoning or food-borne illness,” he said; “so, keeping those things in mind, knowing the four steps to food safety.”

Those four steps are washing hands and surfaces often, taking care not to cross-contaminate, cooking foods to the right temperature and refrigerating promptly.

The same study observed people’s use of a food thermometer, which is recommended for cooking meat and poultry products. Beef, pork, and lamb should be cooked to at least 145 degrees, and poultry to 165 degrees.