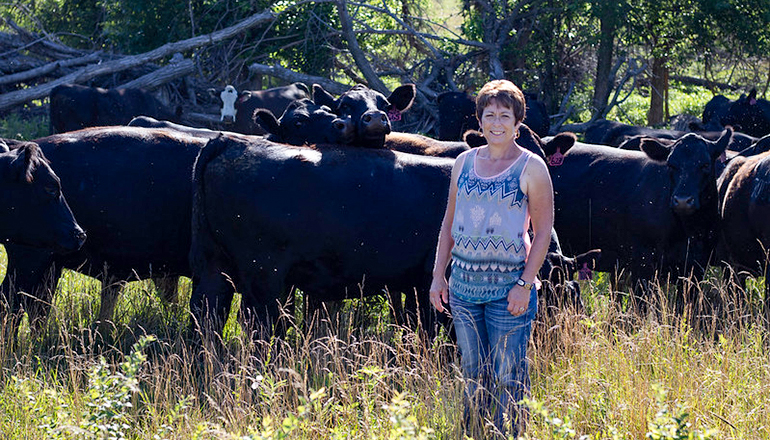 Thummel’s faith is planted as deep as her agriculture roots on their sprawling cow-calf operation in northwest Missouri. As a fifth-generation farmer, Thummel got her start on her family’s dairy farm in southwest Iowa.

“I truly believe that farming chose me, I don’t believe I chose it,” said Thummel. “I grew up in a little town called Shannon City, Iowa, and my mom and dad dairy farmed. From an early age, I was in charge of the bottle calves. It’s been a natural progression for me to like the cattle and be involved in cattle.”

After graduating from Northwest Missouri State in Maryville, Thummel and her husband began building their cow-calf operation.

“We do what we need to do with the land that we have, and thankfully we have land that fits itself to cattle production, and that’s what we do.”

Thummel’s love for cattle comes from their relational tendencies. As someone who values relationships herself, she enjoys watching the bond form between a dam and her calf. Her passion for cattle is matched only by her desire to advocate for the agriculture industry.

Thummel is the Region 4 Vice-President of the Missouri Cattlemen’s Association, which is the second-largest state affiliate of the National Cattlemen’s Beef Association. She’s proud to be a part of the organization and advocate on behalf of Missouri’s farmers and ranchers on the state and national levels.

“I think it’s important to advocate for organizations like MCA so we can tell our story,” said Thummel. Her work for the organization has turned into a family affair as her daughter Sydney has taken on the role as the manager of membership for the Missouri Cattlemen’s Association.

With her two sons involved in the family’s cattle operation, and her daughter actively involved in MCA, the cattle industry truly is Thummel’s life.

“Farm for life means to me that without the farm, there wouldn’t be life,” said Thummel. “Then I could take that conversely and say my life is the farm. That phrase in itself conjures up all kinds of emotions, memories, and hopes for the future.”