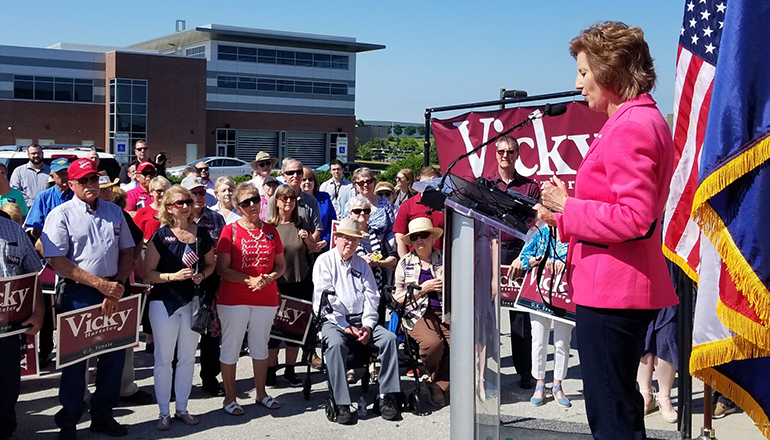 (Missouri Independent) – Vicky Hartzler made her entry into the 2022 U.S. Senate race official Thursday, kicking off her campaign at a firearms store surrounded by supporters.

One day before Republicans gather in Kansas City for their annual Lincoln Days meetings, Hartzler said her experience in Congress will make her the best candidate over the three men who are also seeking the nomination to replace U.S. Sen. Roy Blunt.

Hartzler bragged that she, unlike the three men who have announced they will run, has actually worked with former President Donald Trump on the programs he embraced during his four years in office.

“I am one of only two members of Congress from Missouri to have voted for and supported the efforts of President Trump over 95 percent of the time,” Hartzler said.

Unlike her three competitors, Hartzler chose to announce her candidacy with a public event in the district rather than an appearance on Fox News.

For the crowd of about 150 that gathered on Thursday, Hartzler struck the major points Republicans have used to attack Democrats and President Joe Biden since he took office in January.

“The socialist Democrats are endangering our security, bankrupting our nation, killing our jobs, fueling inflation, harming our children, defunding our police and rewriting our history,” Hartzler said. “They are destroying the country you and I love and they must be stopped.”

Hartzler is giving up what’s considered a safe GOP Congressional seat in 2022 for the uncertainty of the Senate primary. Supporters in the crowd said they think she can beat Greitens, Schmitt and McCloskey, and anyone else who enters the race.

Jackie Langston, who drove up from Johnson County, wore her county’s Republican Women’s Club badge and said her entire group is behind Hartzler. Johnson County is in the 4th District.

“I think she sees a lot of the value in women and like us, supports more freedom,” Langston said.

Langston said she would be happy to vote for any of the current primary candidates in November 2022 because “I don’t see anyone running who is an extremist.”

Tom Mendenhall, a Republican from Columbia who said he’s attended several Republican National Conventions, said he backs Hartzler because he has gotten to know her while she has represented his city in Congress.

“I think she has done a good job and I don’t think she is an opportunist,” Mendenhall said. “She’s paid her dues.”

Hartzler has been a member of the House Armed Services Committee and promised she would back a strong military, work to restart construction on the southern border wall suspended by Biden, and end “woke” indoctrination of soldiers and sailors.

“I have delivered in the U.S. House and that is what I will do in the Senate,” Hartzler said.

Hartzler began her political career in the Missouri House, where she held a seat representing Cass County from 1994 to 2000.

She played a prominent role in statewide politics for the first time in 2004, when she served as spokeswoman for the Coalition to Protect Marriage in Missouri, which successfully campaigned for a state constitutional amendment to ban same-sex marriage.

Following the U.S. Supreme Court ruling legalizing same-sex marriage, Hartzler was the only member of the Missouri congressional delegation to issue a public statement in support of Kim Davis, clerk of Rowan County, Ky., who refused to comply with several court orders directing her to issue marriage licenses to same-sex couples.

Hartzler was elected to Congress as part of a Republican wave that swept the GOP into a House majority it did not relinquish until 2018. In that election, she defeated veteran U.S. Rep. Ike Skelton, the last rural Democrat to represent Missouri in Congress.

Since her district was redrawn after the 2010 census, Hartzler has not received less than 65 percent of the vote in five re-election victories.

Hartzler and her husband,  Lowell Hartzler, own farms and a farm implement business based in Cass County. During her first campaign for congress and since environmental organizations and groups opposed to concentrated farming have highlighted the subsidy payments the farms have received from programs she voted for in the U.S. House.

Those subsidy payments shot up in 2018, 2019, and 2020, for a total of $232,570, according to federal data posted online by the Environmental Working Group. Subsidies shot up after Trump created the Market Facilitator Program to offset price declines caused by trade disputes with China and other nations.

“We found that rather than supporting small, struggling farmers, MFP money has overwhelmingly gone to farmers who are already wealthy, as well as to people who live in cities and other places far from the fields,” the Environmental Working Group stated on its webpage about the program.

Hartzler’s business interests have also been helped by pandemic loans created under relief bills she supported. Hartzler Farms received a Paycheck Protection Loan of $26,900 in 2020, and Heartland Tractor, the family implement business, received a loan of $451,200.

Questioned about the payments, Hartzler defended the policies that produced the subsidies.

“I am a farmer and people understand that is Missouri’s No. 1 industry,” Hartzler said. “It is vital we have safety net programs for farmers to stay viable so American consumers can have the lowest priced food in the world.”

The field in the Republican primary isn’t entirely set, with several other candidates considering joining Hartzler, Greitens, Schmitt, and McCloskey in the race.

Rep. Jason Smith, R-Cape Girardeau, suggested Wednesday on Fox Business Channel that he will be endorsed by Trump when asked about a recent meeting in New York.

“President Trump will be very involved in the Missouri senate race and will make sure his person crosses the finish line,” Smith said. “I have no doubt that he is going to be with the right person, so we’ll see as time goes ahead.”

The likelihood of a bigger field does not deter her, Hartzler said.

“I am not so concerned about who else is in there,” she said.

She did take a swipe at the current field of opponents.

“Being in the U.S. Senate,” Hartzler said, “isn’t a learn-on-the-job experience.”