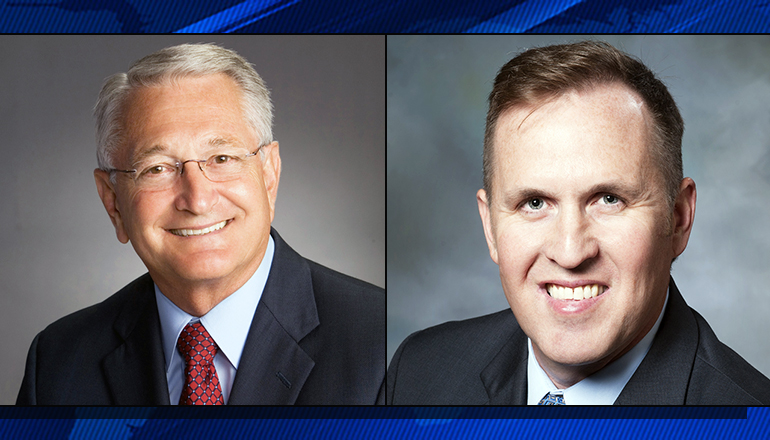 Vice Chairman for the Coordinating Board for Higher Education Mike Thomson and Steven M. Schieber, Chief Executive Officer for the Critical Access Region of the St. Luke’s Health System will give the commencement addresses at North Central Missouri College in Trenton, Missouri on May 11, 2019. Chairman Thomson will speak at the 9:00 a.m. morning ceremony and Mr. Schieber will be the 1:00 p.m. afternoon speaker. Both ceremonies will take place at the Ketcham Community Center on the NCMC campus near downtown Trenton.

Steve has contributed to the community through multiple roles. He currently serves on several local community boards. Steve served as past president of the board of directors for the Great Northwest Day at the Capitol and Leadership Northwest Missouri. He is a former board member of the board of directors for the Missouri Rural Health Association and a former member of the Missouri Advisory Committee for the U.S. Commission on Civil Rights.

Mike, originally from Craig, Missouri, attended college at Northwest Missouri State University where he received his Bachelor’s and Master’s Degrees in

Education.  Mike worked in Public School Education for 30 years where he served as a teacher, counselor, administrator, and coach.  In 1997, he was honored as the Outstanding Secondary School Guidance Counselor in Missouri.   He taught in the Psychology Department at Northwest MO State University and recruited students in the North Missouri area for the University.  Mike was elected to the Missouri House of Representatives in 2006 and served as the District 1 Representative until he was termed out at the end of 2014.  Mike then served as Marketing and Development Director for the Community Foundation of Northwest Missouri until he recently retired.

In 2016, Mike was appointed to the Missouri Coordinating Board for Higher Education where he presently serves as Vice Chairman.  He is a member of the Missouri Career and Technical Education Advisory Board and recently became Chairman of the Northwest Missouri Enterprise Facilitation group, which is a non-profit organization that provides free confidential consultation and counseling for entrepreneurs and small businesses.

Mike resides in Maryville, Missouri with his wife, Nancy.  They have two married daughters and four grandchildren.