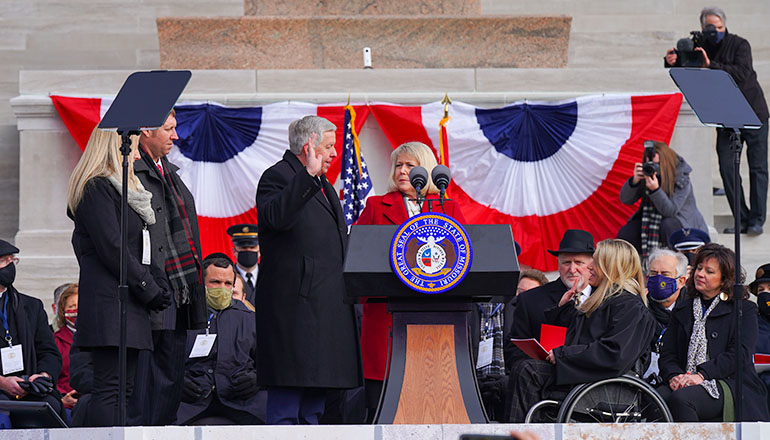 Governor Michael L. Parson was sworn in to a full term as 57th Governor of the State of Missouri at the 2021 Bicentennial Inauguration.

Governor Parson’s career in public service began with six years in the United States Army and over 22 years in law enforcement, including serving as Sheriff of Polk County from 1993-2005. Prior to taking office as Governor in June 2018, Governor Parson served as the 47th Lieutenant Governor of Missouri and a member of Missouri’s General Assembly.

The Bible used by Governor Parson during the swearing-in ceremony was a gift given to him by First Lady Teresa Parson.

A 19-gun salute was also performed by the Missouri National Guard during the inauguration ceremony. The gun salute system has origins in naval tradition in which salutes were fired from warship cannons. According to the U.S. Army Center of Military History, warships originally fired 7-gun salutes with the number seven likely chosen because of its astrological and biblical significance.

The United States gun salute system has evolved today into a system of odd numbers indicating the rank of a military member or public servant. The 19-gun salute is reserved for the Vice President, Cabinet members, Chief Justice, governors of states, and general officers in the military of five-star rank, among others.

Today’s inauguration ceremony concluded with a special salute to Missouri signifying its entry as the 24th state in the United States 200 years ago. Approximately 2,000 guests were in attendance.

On Saturday, January 9, Governor Parson and First Lady Teresa Parson also attended two inaugural prayer services at Southwest Baptist University in Bolivar. Information regarding future inaugural and bicentennial events, including the inaugural ball and parade, will be released at a later date.