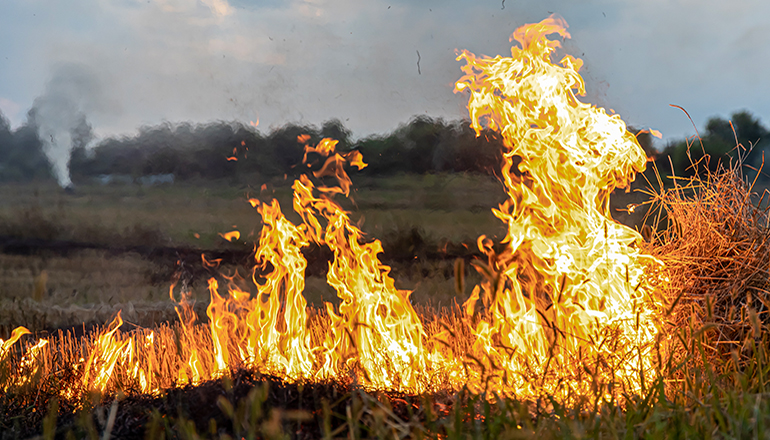 Roadway accidents and combine fires make harvest the most dangerous time of the year for those who work in America’s most dangerous occupation – farming, says University of Missouri Extension health and safety specialist Karen Funkenbusch.

“Unfortunately, these fires happen all the time,” adds John Worden, interim coordinator of MU Extension’s Fire and Rescue Training Institute. “Because of the severe drought conditions and high winds we had recently, it’s just been the right mix to make a fire explode and get away.”

The combination of high temperatures, dry crops, and woodland debris along with leaking fuel, cracked hoses and heated bearings and belts creates a volatile situation that results in lost productivity, lost property, and personal injuries.

Fortunately, farmers can prevent many of these losses by taking extra precautions, says Funkenbusch. She lists four main ways to curtail losses:

Avoid harvesting during extremely windy conditions. High temperatures, low relative humidity, and wind speeds of more than 20 mph are ingredients for disaster. The Missouri Mesonet weather station network, operated by MU Extension, gives valuable wind speed information for many areas of the state at this link.

If possible, have a disc and a large water tank nearby. Some safety experts recommend using a ground chain attached to the combine frame to prevent static electricity from igniting residue. Let the chain drag on the ground while in the field.

Also, let your combine cool for at least 15 minutes before fueling or storing in the shed for the evening, says Funkenbusch.