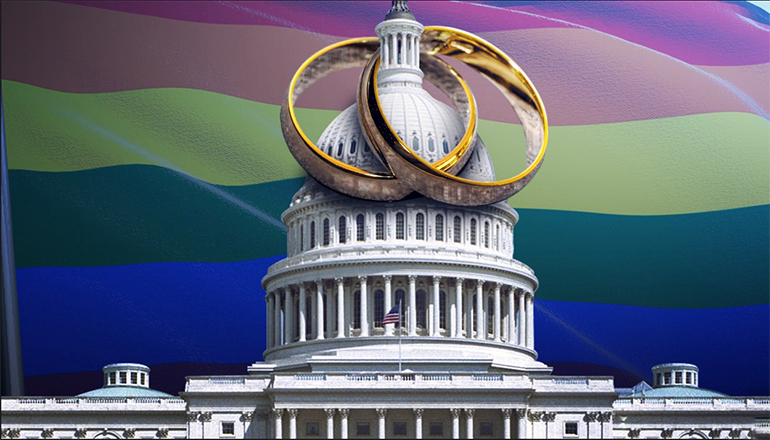 Ashcroft, a Republican considering a bid for governor in 2024, sent Blunt a letter Tuesday asking him to reverse his stance and work to block the Respect for Marriage Act from becoming law.

In the letter, Ashcroft noted that Missouri’s Constitution defines marriage as a union between a man and a woman and Blunt should honor the 70% of Missourians who voted to add that language to the constitution in 2004.

The provision was in effect until the 2015 U.S. Supreme Court decision legalizing same-sex marriages nationwide.

In an interview with The Independent, Ashcroft said he had tried to call Blunt to lobby him in opposition to the bill but had been unable to reach him, so he issued the letter. A vote is scheduled for Tuesday evening.

Blunt announced his support for the bill earlier this month after sponsors added provisions intended to protect religious institutions and organizations from lawsuits for refusing to provide services to same-sex couples.

Blunt has voted three times this month – including a vote Monday evening – to move the bill past a filibuster. Sen. Josh Hawley, Missouri’s other Republican senator, has opposed the measure on all three votes.

In a statement issued on Nov. 16, Blunt said he was comfortable with the religious liberty provisions of the act. The bill makes sure that every state recognizes marriages performed in other states, Blunt said, providing the same privileges and imposing the same responsibilities.

“And,” Blunt said, “this legislation enhances the religious freedom for all Americans by protecting religious organizations from retaliation by federal agencies due to their views on marriage. I believe it’s better for Congress to clarify these issues than for federal judges to make these decisions.”

Blunt will retire from politics when his term ends in January. Attorney General Eric Schmitt, a Republican elected to replace him, has not made any recent public statements about the act. His office did not immediately respond to a request for comment on Ashcroft’s letter.

Enactment of the Respect for Marriage Act will put protection of same-sex union into federal law and make it more difficult to overturn the 2015 decision in Obergefell v. Hodges. The possibility of the court reversing itself was raised this summer when the court issued a ruling overturning the 1973 Roe v. Wade decision that recognized a constitutional right to abortion.

In a concurring opinion in that case, Justice Clarence Thomas wrote that the court should reconsider its decision in Obergefell, as well as decisions recognizing the right of access to contraceptives and to engage in same-sex intercourse.

In the interview, Ashcroft would not say whether he wants or expects the Supreme Court to overturn the right to same-sex marriage. But if Thomas is correct, he said, the bill before the Senate is unconstitutional.

“If it is true that the court was wrong in Obergefell, what is the authority to pass this law?” Ashcroft said.

In his letter, Ashcroft raised the specter of an aggressive federal Justice Department suing individuals and institutions who refuse to perform same-sex marriages or provide services to same-sex couples based on religious beliefs.

“Specifically, RFMA runs afoul traditional principles of federalism, will embolden an already weaponized U.S. Department of Justice and is simply counter to Missourians’ overwhelming desire that marriage be between a man and a woman,” Ashcroft wrote.

Missouri House Democrats, in a tweet, accused Ashcroft of “bigotry” for opposing the federal bill.

“The Secretary of State views LGBT Missourians that want to consecrate their bond as undeserving of that right, a right he believes should belong exclusively to straight people,” the Democratic statement read.

If the act is needed, Ashcroft said, it should not be done in a lame-duck session after an election that changed party control of one chamber of Congress. He addressed the letter to Blunt, he said, because as a veteran lawmaker and member of the GOP leadership, he might find a late way to prevent a vote.

“I believed there were procedural maneuvers and he is better at those than I am,” Ashcroft said.

Ashcroft is the only Republican statewide elected official to make a public statement in advance of the vote.

The offices of Gov. Mike Parson, state Treasurer Scott Fitzpatrick, and Lt. Gov. Mike Kehoe, like Schmitt’s office, did not respond to requests for comment. The social media feeds for their offices have no comments on the act since the Nov. 16 changes that won Blunt’s support.

Kehoe is an announced candidate to succeed Parson in 2024 and Ashcroft is considering a run.

Ashcroft declined Tuesday to say whether he will run.

“I am just doing my job and we will see what happens,” Ashcroft said.