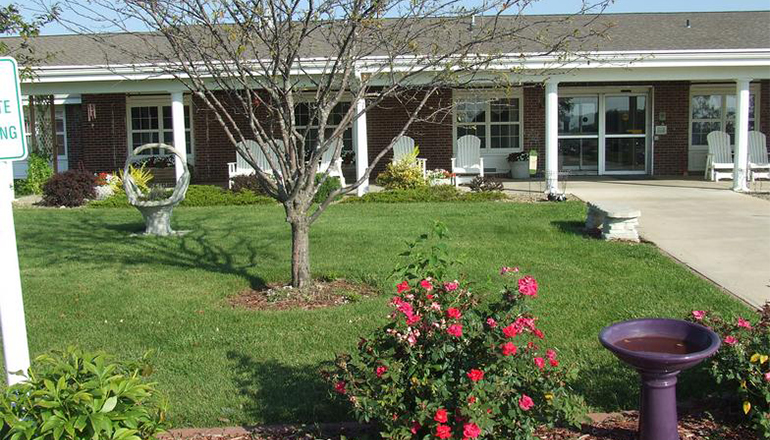 The Sunnyview Foundation supports the Sunnyview Nursing Home in Trenton. It is a 501(c)(3) that can accept donations from the community.

Smith explains Sunnyview is a county-owned facility, and a lot of small county-owned facilities in the country are closing due to regulations, the pandemic, and other issues. She says if the community did not make donations to the Sunnyview Foundation, the facility would not be able to provide some of the things it can.

Grundy County Nursing Home District Board of Directors Chairman Jim Cox says the Marvin and Jackie Sharp family made a big donation to the Foundation, which will allow it to continue to help Sunnyview.

Smith notes the Sharps’ contribution made it possible to purchase the minivan as well as four lift systems for use inside the facility. She explains when she came to Sunnyview, the lift systems were old and manual.

Smith encourages anyone who wants to support Sunnyview to reach out to her or the Foundation. She adds that the facility needs help, especially with more regulations but no money to meet those regulations.

The Sunnyview business office has normal hours of 8 to 5 o’clock Monday through Friday. The phone number is 660-359-5647.

Sunnyview Nursing Home Administrator Trish Smith reports a national nursing shortage has affected the facility in Trenton. However, Sunnyview has enough staff members to take care of the residents.

The facility is using some agency personnel, but it has systems in place to grow its own.

Smith calls her staff “amazing.” She notes one thing that impressed her most when she first came to Sunnyview was that it smelled clean.

There are a number of residents who have dietary restrictions. Smith says the dietary department listens to residents.

Administrator Trish Smith says one event held at the facility this year was a box car derby.

She notes she also played Hungry Hippo with residents and was on a car dolly trying to get balls.

Smith reports visitors are allowed inside the facility.

Sunnyview Nursing Home is the county nursing home. Grundy County Nursing Home District Board of Directors Chairman Jim Cox says Smith has kept the board up to date on regulation changes. He comments the government sends out new things that have to be done, but it does not send money to do it.

Cox says some renovations have been made at Sunnyview. One involved the boiler.

Cox notes the boiler was from around 1972.

Cox says the HVAC helps with disease control because it kills germs. He adds that the board thought it was important to include ionizers.

Board Member Jim Bush says ionizers in the HVAC purify the air, keep it fresh, and circulate it.

He reports windows were replaced, which enhanced individualized comfort in rooms. Residents can control the sunlight coming into the rooms and can open the windows if they would like.

Cox reports lights were changed to LED, and water appliances are now low water usage to help save money.

Bush says the board has contracted for a new complete video system, which will be beneficial to Smith in watching for the safety of residents.

The board also contracted to replace the speaker system, which Bush mentions was crackling, and the wiring had been there since the beginning of the building.

There are openings for apartments. Contact Brewer or Martin for more information on the program at 660-359-5647.