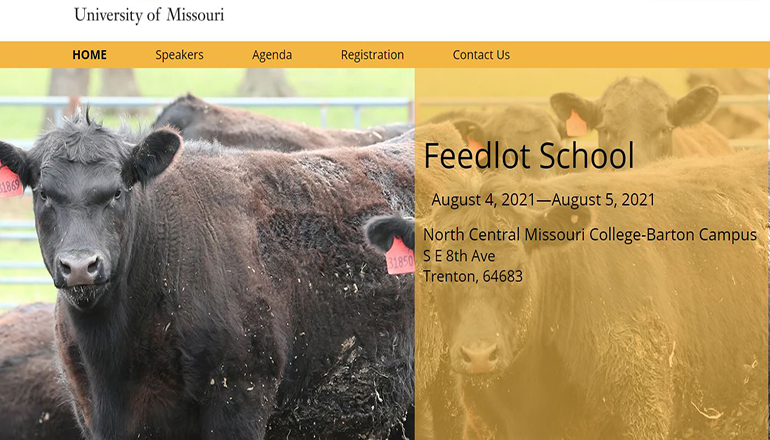 The University of Missouri Extension will hold a Feedlot School Aug. 4-5 on the Barton Campus of North Central Missouri College in Trenton.

Speakers will present the “ins and outs of feeding cattle in Missouri,” says MU Extension beef nutritionist Eric Bailey. “There is renewed interest in feedlots due to new packing plants being built in and around Missouri.”

Although Missouri ranks third nationally in beef inventory, it has not supported feedlots in the past, Bailey says. This means revenue generated by Missouri’s large cattle industry goes out of state.

Missouri cattlemen raise 1.7 million calves annually but feed out only 187,500 of those.

“We want to keep a greater portion of these cattle at home and feed them on the farm instead of shipping them out,” he says. “This will add revenue to farms and economic impact for Missouri.”

Bailey will cover the results of a recent USDA-funded feedlot project at MU’s Thompson Research Center, which is known for its long-standing breeding program of Angus cattle chosen for growth and carcass genetics.

“Cattle performed exceptionally in the first year of our project, garnering $76 per head in premiums at harvest and $125-$180 per head in income over the costs associate with feeding,” Bailey says.

Producers attending the feedlot school will tour three local confinement feeding facilities and see different scales of operation. “We are feeding one to two loads of feedlot cattle at MU Thompson,” Bailey says. “Other operations we will tour are larger and more diverse, including feeding cull cows.”

Other topics include why producers should feed cattle in Missouri, performance expectations, financing a confinement feeding facility, insurance, and risk management, feeding cull cows, diet formulation, bunk management, and feeding technologies. There will also be a feed mixing demonstration.