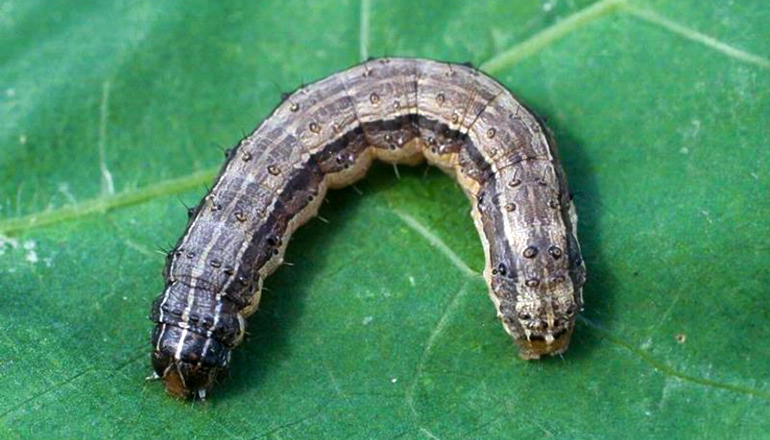 Infestations of fall armyworms have shown up recently in area pastures and hayfields. Be sure to scout your fields in the coming weeks, as a second generation is likely to appear in September.

Fall armyworms are a periodic pest in Missouri that feed on over 100 plant species but prefer lush, green pastures and fields, with brome and alfalfa as favorites. They do not overwinter in Missouri but survive in Gulf Coast states and migrate northward as moths on air currents. The moths can fly over 1000 miles, and outbreaks are currently spreading throughout the Midwest and Northeast U.S.

Once fall armyworm moths reach an area, they will fly and mate at night, after which the females will lay up to 1000 eggs in masses. As the eggs hatch, the larvae feed on the foliage of nearby plants. Armyworm larvae generally have 6 instars (development stages), with larvae in the 1st through 4th (up to 0.5 inches) instars consuming relatively small amounts of forage. In the 5th and 6th instars, the armyworms become one of the fastest-growing animals on the planet, consuming over 93% of the total foliage that it will consume in its life span. The larvae will then burrow into the soil and pupate, emerging as adults in 10-14 days, allowing the cycle to begin again. The entire life cycle takes 30-40 days, meaning a second generation is likely to be active in Northwest Missouri before a freeze kills the remaining armyworms.

Signs of an armyworm infestation can be confused with drought damage. As the worms feed on the tender top leaves, the field is left with a brown appearance. Armyworms are named for the way they quickly “march” through a field, consuming all of the vegetation in their path. They avoid feeding in the heat of the day, so scouting should be done in the early morning or evening.

Thresholds for treatment of armyworms are if three or more half-inch larvae are present per square foot. Larvae larger than 1.5 inches are nearing pupation, so control is not recommended. Fall armyworms’ resistance to pyrethroids were confirmed earlier this year, so it is recommended that a different insecticide mode of action is used to manage armyworms. Natural enemies such as parasitoid wasps affect fall armyworm but will never result in complete control. Therefore, scouting your fields until the first hard frost is the best way to prevent losses to this pest.