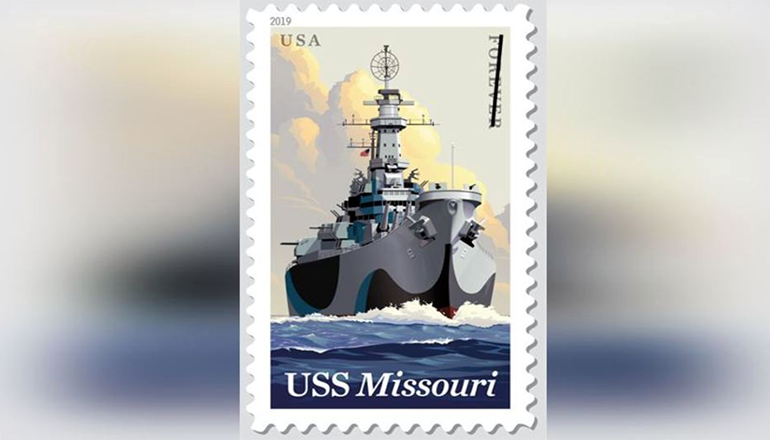 The USS Missouri, affectionately nicknamed the “Mighty Mo” was the third U.S. Navy ship to be named after the Show Me state and the fourth American warship* to bear the name – there was a Confederate Missouri that was captured by Union forces during the Civil War but never commissioned as a United States Ship (USS). Today, a Virginia – class submarine, USS Missouri (SSN-780) has the honor of being the fourth USS Missouri and carrying the Missouri legacy into the future.

Missouri had a long and distinguished career in World War II and conflicts that followed with Missouri hosting the surrender ceremonies following the Japanese surrender marking the end of World War II.

The Japanese Instrument of Surrender was the written agreement that formalized the surrender of the Empire of Japan, marking the end of World War II. It was signed by representatives from the Empire of Japan, the United States of America, the Republic of China, the United Kingdom of Great Britain and Northern Ireland, the Union of Soviet Socialist Republics, the Commonwealth of Australia, the Dominion of Canada, the Provisional Government of the French Republic, the Kingdom of the Netherlands, and the Dominion of New Zealand. The signing took place on the deck of USS Missouri in Tokyo Bay on September 2, 1945.

On December 7, 1991, the Missouri returned to the historic waters of Pearl Harbor for the 50th-anniversary commemoration of the attack on the Hawaiian Islands. Moored a short distance from the USS Arizona Memorial, the Missouri and Arizona provide a symbolic connection from the “day which will live in infamy” to the formal ending of World War II.

The U.S. Postal Service now celebrates the USS Missouri (BB-63) with a Forever stamp. The famed American battleship is being honored to coincide with the 75th anniversary of her commissioning on June 11, 1944. The battleship was affectionately nicknamed “Mighty Mo,”