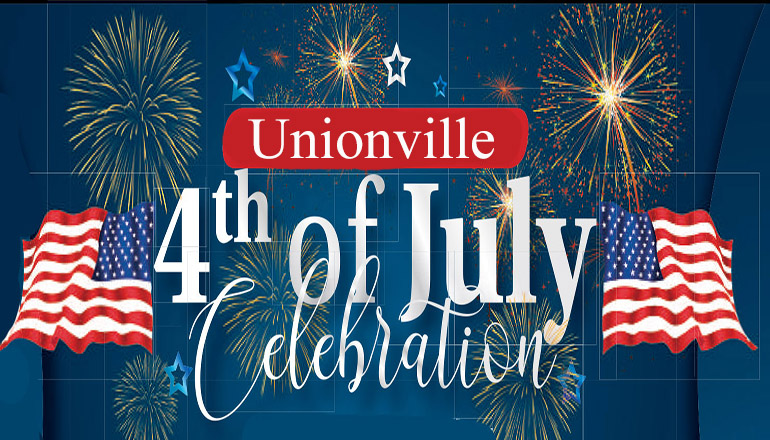 Patriotism and community spirit will be on display at the Unionville, City Park the evening of July 4, 2019

Fun for all ages will begin with the parade at 6 p.m., sponsored by the American Legion and Legion Auxiliary. Entries are to line up at the park at 5:30; anyone can put an entry in the parade. The parade will travel south to 136, east to the square and then north past the Care Center before returning to the park.

After the parade, there will be several activities at the park. A ‘shine and show’ car, motorcycle, and tractor will be on display for viewing. The Girl Scouts and the Sunshine Kids 4-H will operate games for kids and a dunk tank. Thanks to area sponsors, a free concert will be given by the band No Apology beginning at 8 p.m. The band will continue playing after the fireworks.

A Glow Parade will be held at 9:45 on the paved walking path at the park. Along with pedestrians, and bicycles, golf carts, 4 wheelers and side by sides will be allowed on the path. Entries are to line up in the swimming pool parking lot at 9:30. Following the glow parade, a spectacular firework display will be ignited.

The Putnam County Fair Board will be grilling hamburgers and pork patties for purchase and the PC Café will be selling strawberries and ice cream. Fruit smoothies and funnel cake fries will also be available.

During the day, the IA-MO Gas Engine Club will have a display on the park grounds until 5 p.m. The group is expected to set up between 75 and 100 gas engines for demonstration. The public is welcome to stop by and see the display.